This film is the emotional powerhouse of the year. It is directed by Jean-Marc Vallée, who made last year’s emotional powerhouse, Dallas Buyers Club. Here he’s working from a script by Nick Hornby, based on Cheryl Strayed’s memoir, Wild: From Lost to Found on the Pacific Crest Trail. It is a story of redemption, admirably free of moralizing.

Reese Witherspoon plays Ms. Strayed, a young woman who, in 1995, set out to hike the Pacific Crest Trail, that gargantuan schlep which begins on the edge of the Mojave Desert near the Mexico border and stretches all the way up to Canada, up and down and up some more, through California, Oregon and Washington, over spectacular-yet-punishing terrain.

Cheryl was so low she was busted. Her mother, Bobbi, the “love of her life,” had died suddenly of cancer at the age of 45 a few years before, right when things were looking up: Mother and daughter had even been enrolled in university together.

She howled with rage and spiraled off the rails towards self-destruction. She cheated on her husband Paul (Thomas Sadoski), “a good man,” and fell in with men who took heroin, which numbed her pain. Her marriage fell apart.

Under the weight of all of her baggage, literally, she hoists her backpack “Monster” and begins trudging up the trail, alone and rechristened with the new surname she chose in the wake of her divorce: Strayed. She had to, as she puts it, “walk herself back to being the woman her mother thought she was.”

Much of the time she is hungry, dirty and exhausted from the heat and the cold and the terrain. The movie opens with an excruciating scene where Strayed loses a toenail atop a mountain. As a solo woman, she also must live in semi-serious fear of being “raped and dismembered” at any moment. 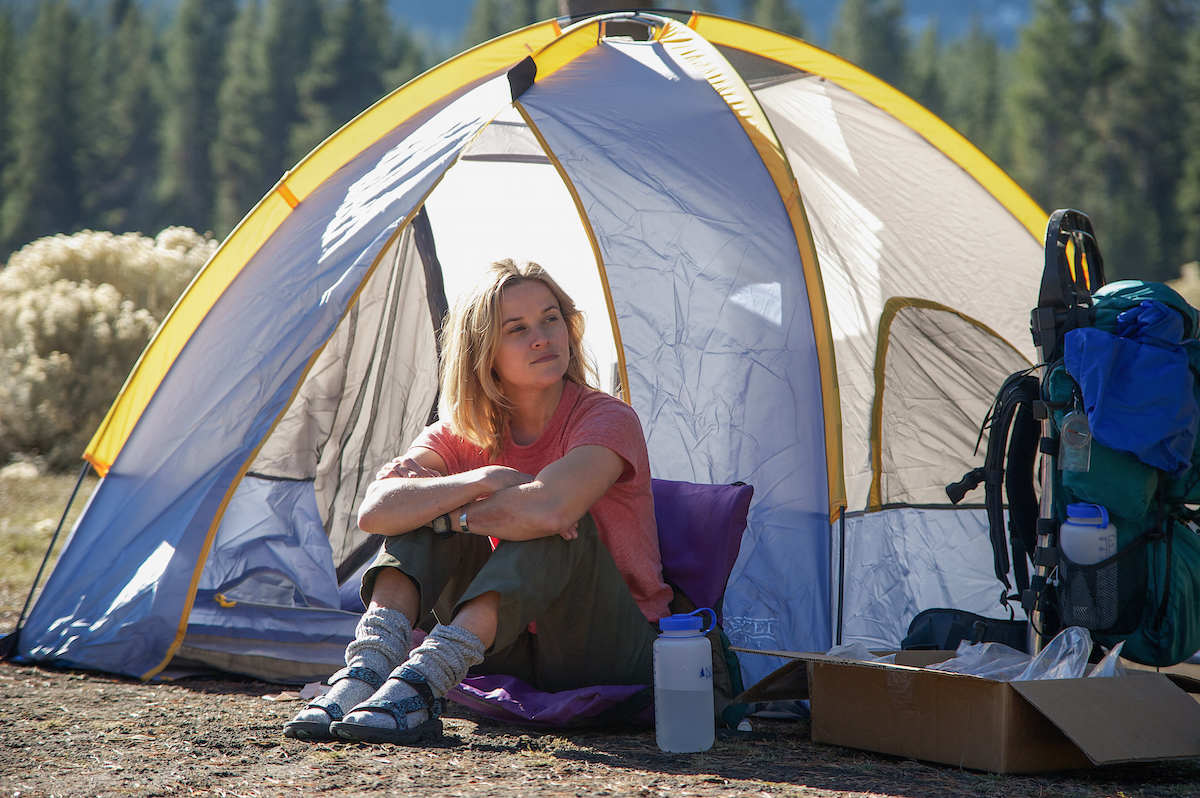 The film flows like a stream of consciousness: a mix of memory, dream and reverie. Cheryl’s voiceover is droll and often profane. Hers is an internal journey as much as an external one, and the film is masterful at expressing her inner consciousness.

The sound design, directed by Ai-Ling Lee, puts us inside this woman’s head. We’re out there in the desert with her, in a tent at night, where every rustle could either be a man-eating wolf or a bunny.

Cheryl is a storyteller. She kept a journal, and Vallée skillfully recreates on film the memoirist’s voice, the way memory is a mix of “truth” and a greater, emotional truth. The cinematographer, Yves Bélanger, uses beautiful natural light throughout. Bélanger knows how to light memory, if that makes sense.

As she walks, her mind’s eye is desultory. Sometimes she gets stuck in a moment: She is haunted by the time she and her brother (Keene McRae) had to put down her mother’s beloved horse.

But happy memories stick, too: her mother dancing free-spiritedly, the way her hand accidentally struck a mirror on the wall.

Songs flit through her consciousness as well. There is Bruce Springsteen’s “Tougher Than the Rest,” just a suggestion of it. We hear the E Street Band’s music more than Bruce’s vocal.

At one point she finds herself walking through a snow-covered expanse. Suddenly skiers whip past, startlingly close. Has she lost her way? At last she spots a small sign on a tree: She is still on the trail, still heading in the right direction.

Bobbi is played by a radiant Laura Dern, so full of the life force you feel the outrage when she is torn away. This a woman who has made the choice to be happy in the face of the realities of life. Maybe one can’t really appreciate what that means until you have reached Bobbi’s age yourself, as Strayed herself now has.

We see Strayed as a callow youth, when she is sometimes condescending to her mother about, say, her taste in books, or critical of her life choices, like marrying Strayed’s dad, an abusive alcoholic. Dern bears these remarks with a mother’s loving indulgence and patience that absorbs slights and wounds, until she finally replies: You know, I don’t regret marrying an “abusive alcoholic,” because he gave me you.

Certain moments are suffused with the surprising magic of life. She meets a young boy on the trail, walking in the woods with his guardian. In only a few glances and words, we understand that this boy is very ill. He sings “Red River Valley” for Cheryl, and the moment is filled with mortality and beauty.

At crucial moments, Cheryl is joined by a fox which may or may not really be there. The fox appears for the last time when she reaches the Bridge of the Gods after hiking about 1,110 miles over three months. These moments do not play as a “device,” but as a reflection, or expression, of mortality. This fox is old and tired and always somewhere just up ahead…and, like Cheryl, stray.

Reese Witherspoon’s performance shows this project meant a tremendous amount to her. She read Strayed’s memoir over one weekend and was so moved she decided to make the film. We’ve read, too, of how she was tired of being “America’s sweetheart,” had sat through one too many studio meetings where execs said, “We can’t show Reese having sex or taking drugs.” This is an actress ready to take a risk, and it is a deeply felt performance.

Wild is about acceptance and surrender, love and hope. I kept thinking of that line from Robert Bresson that meant so much to Martin Scorsese: “God is not a torturer. He only wants us to be merciful with ourselves.”

Born in Athens, Ohio, Scott Pfeiffer has lived in Chicago since 1993. He did a minor in film at Ohio University back in the day. These days, he knocks about Chi-town, taking in film, music and theater. Read his other reviews at The Moving World.

Movie Review: “The Tree Of Life”