< < Back to
While hundreds of scientists have arrived in Athens for the International Space University’s Space Studies Program, Ohio University hosted a slightly different group of professionals this week.

Michael Potter is the Director of several documentaries about Space and served as one of the panel’s two co-chairs.He says that panels like this represent a important and sometimes underrated element of space science. 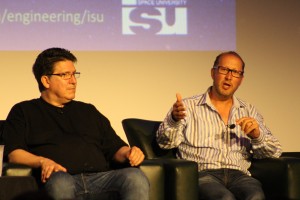 “And so we struggle a lot, in our day-to-day lives about how do you communicate that ? How do you inspire the next generation?” Potter said. “We really are powerful supporters of STEAM, which is Science, Technology, Engineering – the Arts – and Mathematics.”
A main theme of the night’s discussion was the often troubled relationship between science fact and science fiction.

John Beck-Hoffman is a filmmaker for the NASA Jet Propulsion Laboratory. His most famous work is “7 Minutes of Terror” the virally-popular video explaining the challenges of landing of the mars rover. Before the panel, he expressed some of his frustrations in working with science management, saying he didn’t really feel a equal place for art in science.

“Oh John, you’re an artist? Shut up. Artists are like small A, if they’re even in Steam, they’re small A, not capital,” Beck-Hoffman said.

At the Panel, Potter and Dr. Harry Kloor, both ISU graduates, led discussions on the role of science in popular culture and media.

The panel was held in honor of Arthur C Clarke, the pioneering science fiction author of 2001: A Space Odyssey, and a co-founder of the International Space University.

Mike Resnick is the author and editor of dozens of science fiction novels and is currently the record-holder as the most nominated author of the Hugo Award. Resnick worked closely with Clarke, who through his writing made many correct predictions about modern technology. But Resnick cautions against looking to science fiction to tell the future. 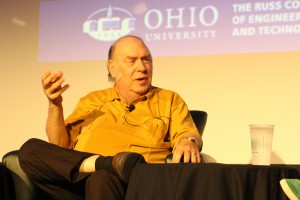 “Science fiction writers will constantly point this out: we’re not in the predicting business, we’re in the “what if?” business,” Resnick said. “There are a lot of what ifs, from which you can draw moral conclusions as well as scientifc ones.”

Dr. Harry Kloor, one of the panels moderators, has worked as a scientific consultant and a writer on such shows as Star Trek Voyager. He echoed that sentiment, warning about the power that creative media have to teach both science fact and science fiction.

“In Hollywood we drive things through drama, through fiction and sometimes we get science right but more often we make a movie like Interstellar,” Kloor said, referencing the 2014 Christopher Nolan film.

However the conversation took turn at one point.

Before the panel John Beck-Hoffman, the filmmaker, was frustrated with this connection between art and hard science. But by the end of the panel, he changed his tune. He described first showing his work to NASA officials after joining the media team and successfully injecting emotion of art into science.

He recalled how eager engineers were to let their guard down for the documentaries he produced.

“Like for me, it is a big honor to be here beceause, as you were talking, and now you want to call it STEAM,” Beck-Hoffman said. “I was like that little ‘a’ begging to be something important, and now I feel like I’m an actual capital ‘A’ in this process.”

That attitude was echoed by the rest of the panelists, all of whom, in their own ways, bring us closer to outer space. 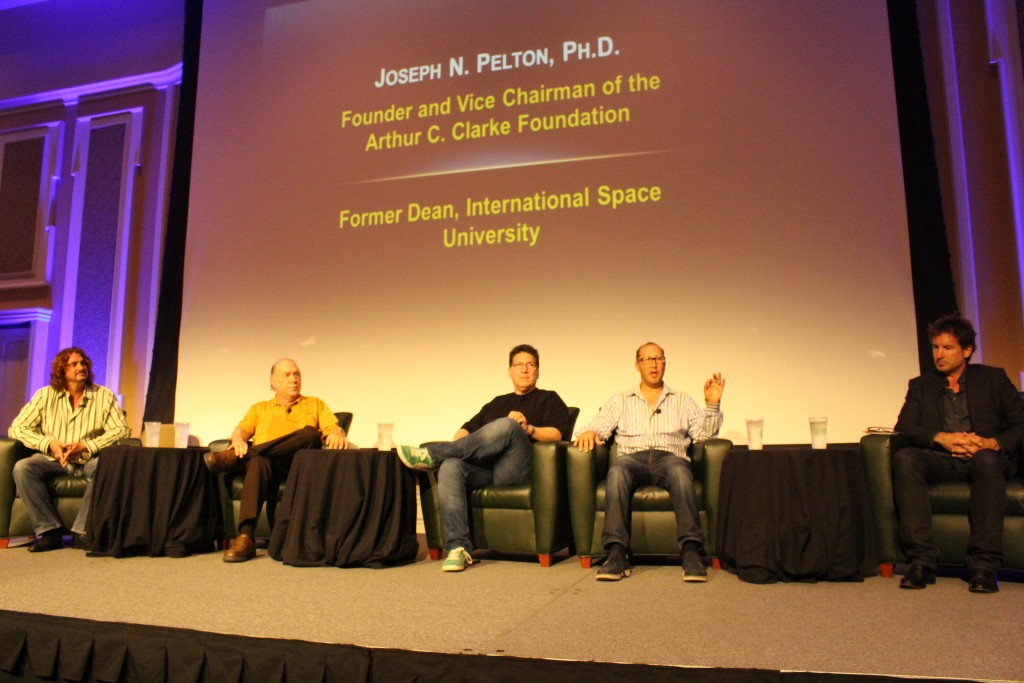