Thursday, October 26, at high noon, multimedia artist John Sims will present Confederate Flag: a Public Hanging, in the Scripps Amphitheater featuring the installation The Proper Way to Hang a Confederate Flag. The installation depicts a Confederate flag hanging from a 13-foot gallows. This symbolic hanging is an act of justice for the many crimes of white supremacy, Jim crow segregation, and the contemporary terrorism associated with this flag and the Confederacy. A community potluck will follow the performance, as was customary to public executions throughout the history of the United States.

A live broadcast of the performance will be available at burnandbury.org.

Sims initially created the performance piece in 2004 in Gettysburg, PA, but due to a backlash from Sons of the Confederate Veterans, and threats of violence, the piece was compromised and only shown inside, minus the performance.

Some 13 years later, the artist will present for the first time this Confederate flag hanging as it was originally intended, in Athens. The performance will follow a public lecture by Sims, “Transformation Proclamation: Flag, Fire, and Freedom,” on Wednesday, October 25, 7 p.m. to 8:30 p.m. in Schoonover Hall room 145; and precede a public panel discussion, “Beyond the Flag: Art, Activism, and White Supremacy” on Friday, October 27 at 12 p.m. in the Walter Rotunda.

After the performance, The Proper Way to Hang a Confederate Flag will be featured in the Kennedy Museum of Art’s Expression and Repression: Contemporary Art Censorship in America, exhibition, which will have an opening reception on Thursday, October 26 from 5 p.m. to 7 p.m. The exhibition explores Sims work, as well as the work of artists Sue Coe, Kara Walker, and David Wojnarowicz. This exhibition presents the work in the context of freedom of expression, discussing how the artists use subversive or symbolic subject matter in their work to evoke critical thought about significant social issues and conditions, and how and why their work has been repressed or censored in the U.S.

Sims’ contribution to the exhibition is a part of a much larger work that he’s been creating for nearly two decades, entitled the Recoloration Proclamation. The artist describes the project on his website:

“The Recoloration Proclamation has developed into a flag exhibition and film project that deals with issues of race, religion, and corporate branding. The exhibition part presents a collection of recolored Confederate, Israeli, Palestinian, and Chinese flags aimed to engage the idea of averaging sacred codes, symbols, and colors. In a visual political context the work initiates a difficult discourse on the psychological complexities of symbol warfare.”

Sims is a graduate of Antioch College in Yellow Springs, OH, and he expressed that he is excited to bring the performance to Ohio. 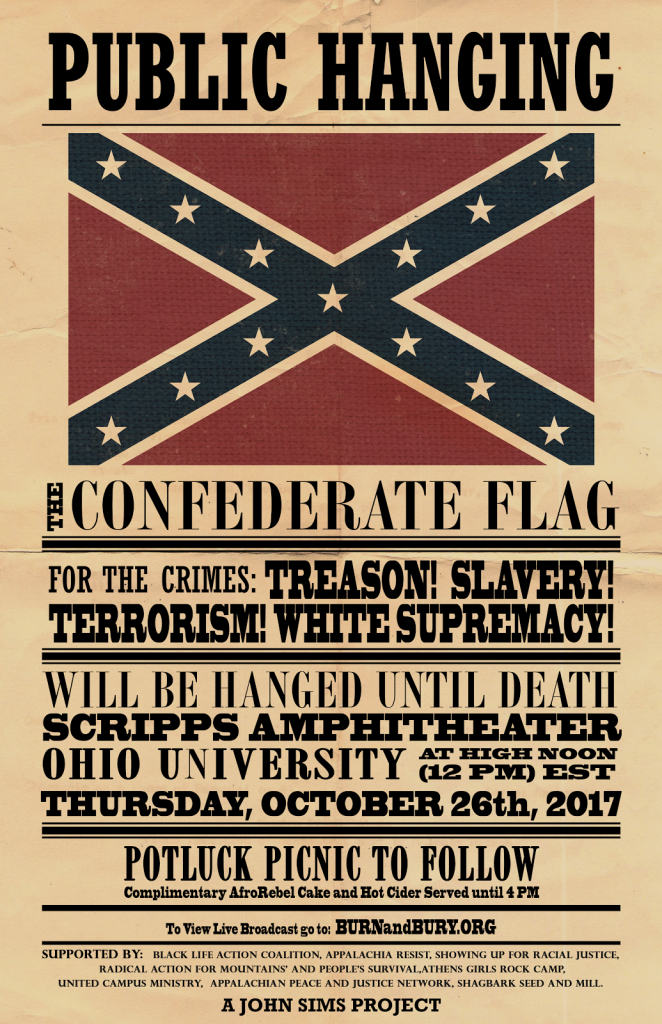 Columbus Flag Retailer Says No to Sales of Confederate Flag