Documentary from “Hoop Dreams” Director Steve James Tells Story of the Only U.S. Bank Prosecuted in Relation to the 2008 Financial Crisis

On Tuesday, January 2, FRONTLINE (PBS) will present the broadcast Abacus: Small Enough to Jail — the underreported story of the only U.S. bank prosecuted in relation to the 2008 financial crisis.

It’s the newest film from acclaimed documentary director Steve James (Hoop Dreams), who last worked with FRONTLINE in 2012 on the Emmy Award-winning documentary The Interrupters.

One of the past year’s most critically acclaimed documentaries during its robust international film festival run and a national theatrical release, Abacus: Small Enough to Jail tells the saga of the Sungs — a Chinese-American family who own and operate Abacus Federal Savings in New York’s Chinatown.

At the time of the trial, Abacus was the 2,651st largest bank in the United States. It’s founder, Thomas Sung, says he started it with the goal to empower the local community and offer a personal alternative to big banks. “When we started the bank, it was our motivation to help a lot of people, a lot of immigrants,” says Sung, who sees himself in the image of George Bailey from It’s a Wonderful Life.

But in 2009, the Sung’s fired a loan officer after they discovered fraud. They reported the fraud to law enforcement, but soon found themselves and the bank under scrutiny. Two-and-a-half-years later, Abacus Federal Savings and two senior officers were accused of mortgage fraud by the Manhattan District Attorney’s Office, becoming the only U.S. bank prosecuted after the 2008 financial crash and the first bank indicted in New York since 1991.

“We felt that the provable evidence stopped at a certain level, but that the individuals who were charged were high enough in the corporation to charge the corporation,” Manhattan District Attorney Cyrus R. Vance, Jr. says in the film.

With riveting detail, Abacus: Small Enough to Jail follows how the indictment and subsequent trial forces the Sung family to defend themselves — and their bank’s legacy in the Chinatown community — over the course of a five-year legal battle.

Abacus: Small Enough to Jail examines the case against the bank, hearing from prosecutors, jurors, defense lawyers, and Mr. and Mrs. Sung and their four daughters — whom James filmed for more than a year as they fought to clear their names. 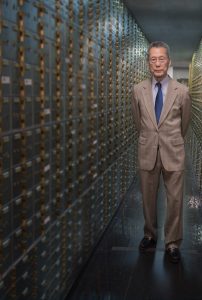 “Tom is not easy to be pushed around, and my girls, they are tough, smart, capable women,” Hwei Lin Sung, Thomas Sung’s wife, says in the film.

The result is a dramatic, 90-minute documentary that The New York Times calls “a classic underdog tale,” and The Hollywood Reporter calls “both an affirmation and an indictment of the American Dream.”

About FRONTLINE
FRONTLINE, U.S. television’s longest running investigative documentary series, explores the issues of our times through powerful storytelling. FRONTLINE has won every major journalism and broadcasting award, including 82 Emmy Awards and 20 Peabody Awards. Visit pbs.org/frontline and follow us on Twitter, Facebook, Instagram, YouTube, Tumblr and Google+ to learn more. Founded in 1983, FRONTLINE is produced by WGBH Boston and is broadcast nationwide on PBS. Funding for FRONTLINE is provided through the support of PBS viewers and by the Corporation for Public Broadcasting. Major funding for FRONTLINE is provided by The John D. and Catherine T. MacArthur Foundation. Additional funding is provided by Ford Foundation, the Park Foundation, the John and Helen Glessner Family Trust and the FRONTLINE Journalism Fund with major support from Jon and Jo Ann Hagler on behalf of the Jon L. Hagler Foundation.