WE’LL MEET AGAIN, a new series produced by Blink Films in partnership with AnnCurry Inc., premieres Tuesdays, January 23-February 27, 2018, 8:00-9:00 p.m. on PBS. Exploring some of history’s most dramatic events through the personal stories of those who experienced them, the series brings together people whose lives intersected at pivotal moments. Executive produced and reported by Ann Curry, each episode of WE’LL MEET AGAIN reveals the powerful bonds forged among people who now, against the odds, have the chance to reunite with someone who transformed their life.

The tides of history can disrupt lives, throwing strangers together or tearing loved ones apart. WE’LL MEET AGAIN reveals these moving personal stories of hope, courage and love: from a Vietnam War baby desperate to find the American father she last saw 40 years ago to the military chaplain who helped a stranger through the trauma of 9/11, from a Japanese-American girl interned in 1942 who never forgot the classmate who helped her during her darkest hours to civil rights workers whose lives were forever changed by the deep relationships they formed in the 1960s South. 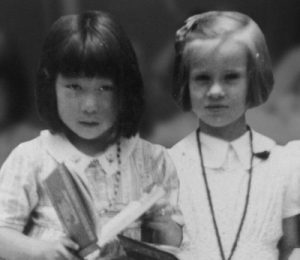 WE’LL MEET AGAIN takes viewers on a journey of hope, searching for clues in marriage records and war and immigration documents, and combing archives to reunite those separated by time and distance.

“This series helps people separated by conflict, war and humanitarian disasters find each other again and reveals untold stories of courage, survival, friendship and even love,” said Curry. “This is human history — not from the point of view of kings or politicians or generals — but of everyday people on the front lines of massive events they have no way to control. Their stories tell us something about what we are made of.”

“WE’LL MEET AGAIN is where history meets the drama of real life,” said Beth Hoppe, Chief Programming Executive and General Manager, General Audience Programming, PBS. “Major events are brought to life in a completely personal way through these memorable stories of those torn apart and thrown together. And how wonderful to have the opportunity to be present at these extraordinary reunions.”

“It’s a privilege to document the stories of ordinary men and women who lived through extraordinary moments in history,” said Justine Kershaw, Blink Films executive producer. “In their quest to be reunited they must unlock some traumatic personal memories of these historical events, a 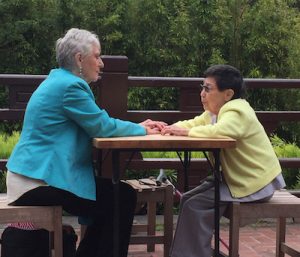 nd their courage to confront their past in order to finally meet again the person with whom they share a unique bond demonstrates the extraordinary power of the human spirit.”

“Children of WWII” – Tuesday, January 23, 2018, 8:00-9:00 p.m.
Following the Japanese attack on Pearl Harbor in 1941, the U.S. entered World War II. Two children whose lives were forever changed by the war search for lost friends. Reiko, a Japanese-American woman sent to an internment camp as a child, hopes to find the classmate who stood by her in the face of anti-Japanese sentiment. Peter, who fled the Nazis with his parents in 1938, searches for the family who befriended him in the last refuge open to the German Jews: the Shanghai Ghetto.