“Mystery Monkeys of Shangri-La” on NATURE, Wednesday, December 19 at 8

Nature Provides a Rare Look at China’s Mystery Monkeys of Shangri-La
Wednesday, December 19 at 8 on WOUB

Hidden away in the Chinese Himalayas are beguiling monkeys unlike any other of their kind. Very rare, and only discovered in the 1960’s, Yunnan snub-nosed monkeys have mesmerizing faces, with tiny noses, almond eyes and large pink lips, while their elfin-like young have ears that make them look like Yoda from “Star Wars.” In the 1980’s, celebrated Chinese wildlife photographer Xi Zhinong became the first to film these striking primates in the wild. And 30 years later, he returned with an all-Chinese film crew to spend two years documenting the story of one family of these monkeys living in one of the highest forests in the world. 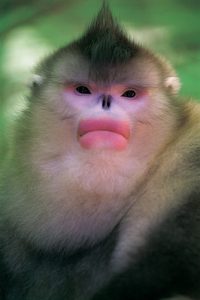 For this ambitious high altitude undertaking, Xi Zhinong assembled an intrepid team consisting of two cameramen, a scientist, three rangers, and six porters. While the porters dealt with equipment and provisions, the rangers and scientist helped track the monkeys who travel miles through precipitous valleys and high mountain passes to find food. Mystery Monkeys of Shangri-La airs on Wednesday, December 19, 2018 at 8 p.m.  on WOUB.  After broadcast, the episode will be available for online streaming at pbs.org/nature.

The film crew, who were surprised to find the monkeys seemingly unafraid of them, first followed a small troop of eight families, each comprised of a male, several females and their young. But their focus narrowed to just one family when they spotted two new arrivals — two half-brothers — in a family of six adults. Their story becomes the heart of the film.

Cameraman Jacky Poon observes that the two are being treated quite differently by their two very different mothers. One baby is protected and indulged, while the other is mostly neglected and haphazardly looked after by the rest of the family. His childhood becomes something of a struggl 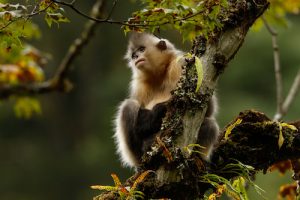 e, but he manages to find his own way with determination and a sense of adventure.
Besides focusing on the two half-brothers, the filmmakers also keep track of about 30 adults, an all-male group of bachelors, led by a formidable fighter who guards the troop, and who impacts the life of the neglected brother. The program also provides a glimpse into the lives of Tibetan Buddhists in the area, not far from an ancient city named after the famous mythical paradise called Shangri-La. Monks from a nearby monastery lead village yaks into the mountains in the spring and return in the fall with a supply of yak butter for their tea. It’s their belief that all mountain life is like a family, that people and animals need each other, even become each other after death.

Against the spectacular backdrop of these mile-high mountains and the lush gardens filled with birds and flowers hidden in the deep valleys below, the film shows these unique monkeys feasting year-round on lichen hanging from fir trees, supplementing their diet in summer with other plants, bamboo, beetles and spiders. And throughout, the crew continues to cover the story of the half-brothers who make their way in the world by very different paths. There are only a few thousand Yunnan snub-nosed monkeys in the world, but they are now famous as symbols of fairness and kindness due to the work of Xi Zhinong who hopes their celebrity will ensure their survival for years to come.

Nature pioneered a television genre that is now widely emulated in the broadcast industry. Throughout its history, Nature has brought the natural world to millions of viewers. The series has been consistently among the most-watched primetime series on public television.

Support for this Nature program was made possible in part by the Arnhold Family in memory of Clarisse Arnhold, Sue and Edgar Wachenheim III, the Estate of Elizabeth A. Vernon, the Lillian Goldman Charitable Trust, the Kate W. Cassidy Foundation, the Filomen M. D’Agostino Foundation, Rosalind P. Walter, the Corporation for Public Broadcasting and public television viewers.

NATURE: Undercover in the Jungle | Wednesday, October 16 at 8