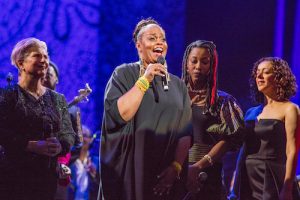 On April 30, 2018, a diverse group of world-renowned artists came together from all over the world for an extraordinary global concert, recorded at St. Petersburg’s famed Mariinsky Theatre, home to the internationally acclaimed Mariinsky Ballet and one of the crown jewels of a city renowned for its UNESCO World Heritage sites. The event took place on International Jazz Day, the one day each year that jazz is celebrated worldwide, bringing together people of all ages, backgrounds, and nationalities in more than 190 countries on all seven continents. The resulting new one-hour music special, INTERNATIONAL JAZZ DAY FROM ST. PETERSBURG, will air on WOUB April 26, 2019.

Long considered Russia’s cultural capital, St. Petersburg has played an important role in the popularization and development of jazz in Russia. The country’s jazz scene was born in 1927 in St. Petersburg with the appearance of the “First Concert Jazz Band” at the St. Petersburg State Capella, followed by the creation of the first jazz collective in 1929. Moreover, St. Petersburg is the only city in the country to have a Jazz Philharmonic Hall, founded in 1989. 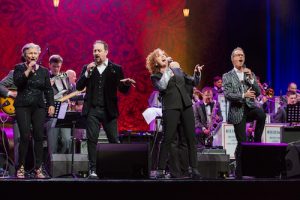 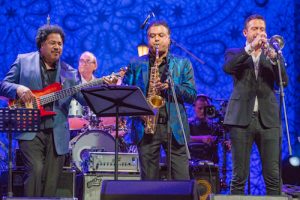 The concert’s many historic moments include an unforgettable performance by The Manhattan Transfer, along with Jazz Day debuts by Malian phenom Fatoumata Diawara and Moroccan sintir master Hassan Hakmoun. The ensemble cast of performers channels the soul and spirit of jazz through swinging renditions of such tunes as “Too Close for Comfort,” featuring vocalists Dianne Reeves and Kurt Elling with organist Joey DeFrancesco; “Actual Proof” with pianist Herbie Hancock and saxophonist Rudresh Mahanthappa; and Victor Young’s classic “Stella By Starlight” interpreted by pianist Robert Glasper, bassist Ben Williams, and drummer Terri Lyne Carrington.

International Jazz Day from ST. PETERSBURG is a co-production of WTTW Chicago and the Thelonious Monk Institute of Jazz.

About International Jazz Day
For more than a century, the truly American music of jazz has promoted peace, diversity, individual expression, dialogue among cultures, and respect for human dignity. International Jazz Day highlights the unifying attributes of this music through live performances, education programs, and special events worldwide. International Jazz Day was first celebrated in 2012, and is recognized on the official calendars of both the United Nations and the United Nations Educational, Scientific, and Cultural Organization (UNESCO). Each year on April 30, universities, libraries, schools, arts centers, organizations of all disciplines, artists, and jazz enthusiasts all over the world honor this revered musical art form that for more than a century has brought together people of different cultures, religions, and nationalities.