Emma Goldman To Have Encore Broadcast
Tuesday, May 21, 2019 on WOUB

Emma Goldman, a biography of the notorious lecturer, fearless writer, and merciless publisher, will have an encore broadcast on AMERICAN EXPERIENCE on Tuesday, May 21, 2019, from 9:00-10:00 pm on PBS. For nearly half a century, the Russian emigrant was the most controversial woman in America, taunting the mainstream with her fervent attacks on government, big business, and war. To the tabloids, she was “Red Emma, Queen of the Anarchists,” but many admired Goldman for her defense of labor rights, women’s emancipation, birth control, and free speech. Emma Goldman is part of a special “Women in History” four-week series, which includes encore broadcasts of Amelia Earhart (May 7), Annie Oakley (May 14) and Rachel Carson (May 28). 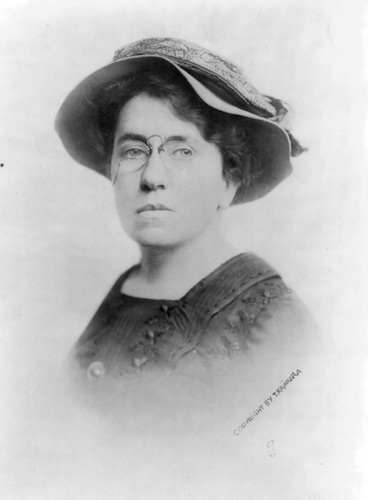 Goldman’s life was indelibly marked by two violent acts: the attempted assassination of anti-union industrialist Henry Clay Frick by her comrade and lover Alexander Berkman (he spent 14 years in prison for the crime) and the 1901 slaying of President William McKinley by Leon Czolgosz, a young anarchist who claimed he had been “set on fire” by Goldman’s exhortations to political assassination and martyrdom. McKinley’s assassination led to widespread condemnation of Goldman and other anarchists. Fearing for her life, Goldman went underground.

In 1906, she reemerged as founder and editor of Mother Earth, an anarchist magazine devoted to politics and literature. Once again a public figure, she returned to the lecture circuit. Her talks on the struggling revolution in Russia, the rights of workers, civil liberties — and even anarchism — drew large, sympathetic crowds. For almost a decade, Goldman maintained a grueling schedule, spending nearly half of every year on the road. In one six-month period, she delivered 120 lectures in 37 cities.

An outspoken opponent of America’s entry into World War I, she was arrested and imprisoned for demonstrating against the draft. In 1919 she, Berkman, and 247 others were deported to Russia, just two years after the October revolution replaced the Czarist regime with Bolshevik tyranny. After two dispiriting years, Goldman and Berkman left the Soviet Union and dedicated themselves to revealing the truth about a revolution gone wrong.

Goldman returned to the United States only once, following the publication of her autobiography, Living My Life. Unbowed by two decades of exile, she announced, “I am still an anarchist. I still advocate world revolution. I still think newspapers twist the facts.” Throughout her visit, the 64-year-old activist was dogged by the FBI. Even so, she lamented, she would have returned to America if she had the chance: “One does not live in a country 34 years and find it easy to go. All the turmoil of body and soul, all the love and hate that come to an intense human being have come to me here.”

On May 14, 1940, Emma Goldman died in Toronto. Denied entry into the United States for so many years, she was finally permitted, in death, to cross the border. She was buried in Chicago’s Waldheim Cemetery, near the graves of the Haymarket martyrs, labor activists whose trial and execution sparked Goldman’s activism in America.

“Amelia Earhart” on AMERICAN EXPERIENCE | Tuesday, May 7 at 9