“Rachel Carson” on AMERICAN EXPERIENCE | Tuesday, May 28 at 8

Rachel Carson, a documentary about the pioneering environmentalist, will have an encore broadcast on Tuesday, May 28, 8:00-10:00 pm on PBS. When Rachel Carson’s Silent Spring was published in 1962, the book became a phenomenon. A passionate and eloquent warning about the long-term dangers of pesticides, the book unleashed an extraordinary national debate and provoked vigorous attacks from the chemical industry. But it also inspired President John F. Kennedy to launch the first-ever investigation into the public health effects of pesticides — an investigation that eventually would result in new laws designed to protect and preserve the environment.

Drawn from Carson’s own writings, letters and recent scholarship, Rachel Carson illuminates both the public and private life of the woman who launched the modern environmental movement and revolutionized how we understand our relationship with the natural world. Featuring the voice of Mary-Louise Parker as Rachel Carson, the film is directed by Michelle Ferrari, produced by Ferrari and Rafael de la Uz, and executive produced by Mark Samels. 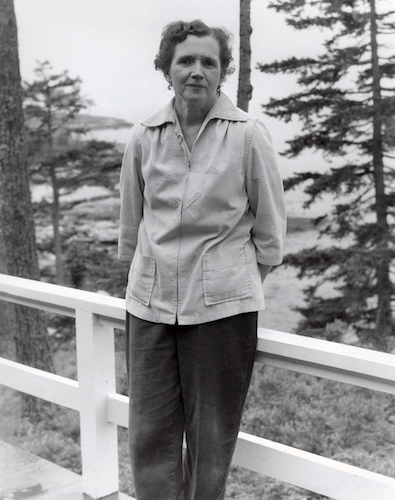 In many ways, Rachel Carson was an unlikely figure to be at the center of a firestorm. Soft-spoken and shy, she much preferred solitary birdwatching to the glare of the spotlight. She had grown up north of Pittsburgh in a house that lacked both central heating and running water; but her mother Maria was fiercely ambitious for her precocious daughter. Inspired by a popular education movement which held that children should study “nature, not books,” Maria made the surrounding woods and fields Rachel’s first classroom. When the time came for her daughter to go to college, Maria sold the family china to help cover her expenses. Carson majored in biology and went on to earn a master’s degree in zoology at Johns Hopkins.

Carson had planned to pursue her doctorate, but financial pressures soon forced her to abandon her studies. She had barely started at Johns Hopkins when her parents, older sister and two nieces came to live with her in Baltimore. Not long after, her father and sister died suddenly, and Carson found herself the family’s sole breadwinner. She took a job as an information specialist at the U.S. Fish and Wildlife Service where her innate inquisitiveness served her well, as did her tireless process of writing and rewriting. Mining the wealth of scientific research suddenly at her fingertips, she created a series of popular radio stories and print articles that made the science behind arcane subjects such as wetland drainage and fish biology accessible.

In 1941, Carson began a series of three books about the scientific life and history of the ocean, which culminated in the publication in 1952 of her first breakthrough bestseller, The Sea Around Us. The book challenged readers to think of the sea as a living entity and was praised by reviewers for both its deep research and its poetry. “If there is poetry in my book,” Carson said, “it is not because I deliberately put it there, but because no one could write truthfully about the sea and leave out the poetry.” The success of the book enabled Carson to quit her day job and to build a summer cottage on the Maine coast. It was there that she met Dorothy Freeman, a neighbor and kindred spirit with whom Carson would forge the most rewarding relationship of her life.

During the many years she spent writing press releases and reports for the government, Carson had pored over the latest scientific studies on the unintended consequences of pesticide use. By 1957, her files were thick with reports of the destructive effects of chemicals on fish, birds and other wildlife. Taken together, these studies seemed to Carson to offer compelling evidence that pesticides had potentially grave disadvantages, none of which were yet fully understood. Already alarmed about the environmental damage caused by the atmospheric testing of nuclear weapons, Carson determined to alert the public to the dangers of pesticides and began the work that would define her legacy, all the while concealing that she was suffering from terminal cancer from all but her closest friends.

Silent Spring was published in September 1962 and became an instant bestseller; it would go on to spark dramatic changes in the way the government regulated pesticide use, and forever transform the way we think about the natural world. By the time Rachel Carson died on April 14, 1964, at the age of 56, the modern environmental movement already was stirring.

“In the 60s, chemicals provided solutions to complex, often devastating challenges like famine and disease. Carson was the first person to point out there’s a price to be paid for that world,” said Samels. “She guided us towards an understanding of the interrelatedness of nature, and challenged us to think about our impact on the world around us. And that is certainly something that resonates as strongly today as it did 50 years ago.”

The Participants, in Alphabetical Order

Deborah Blum is a Pulitzer Prize-winning American science journalist, columnist and author and director of the Knight Science Journalism Program at MIT.

Deborah Cramer writes about science, nature and the environment, and is a visiting scholar at MIT’s Environmental Solutions Initiative.

David Kinkela is Associate Professor of history at SUNY Fredonia and author of DDT and the American Century: Global Health, Environmental Politics, and the Pesticide That Changed the World.

Mark Lytie is Professor of History and Environmental Studies at Bard College and author of Gentle Subversive: Rachel Carson, Silent Spring, and the Rise of the Environmental Movement.

Robert K. Musil is the former CEO of the 1985 Nobel Peace Prize-winning Physicians for Social Responsibility (PSR), Faculty Fellow with the School of International Service at American University, and President and CEO of the Rachel Carson Council.

Naomi Oreskes is Professor of the History of Science at Harvard University.

William Souder is the author of On a Farther Shore: The Life and Legacy of Rachel Carson, Author of Silent Spring.

‘We’ll Have It All Taken Care Of’: Trump Promises Support To Flood-Soaked Carolinas

Going to War | Coming Monday at 10