FRONTLINE Investigates the Hidden Reality of “Sex Trafficking in America”

FRONTLINE will premiere Sex Trafficking in America, a new documentary that tells the unimaginable stories of young women coerced into prostitution – and follows one police unit that’s committed to rooting it out. 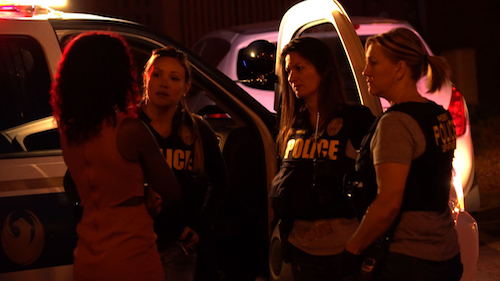 “Most people do not understand the volume of trafficking that’s going on in America, in our own backyard…” Detective Christi Decouflé of the Phoenix Police Department tells FRONTLINE. “Instead of us realizing that it’s an epidemic out there, it’s America’s dirty little secret.”

In the film, award-winning director Jezza Neumann and producer Lauren Mucciolo (Poor Kids) embed with the Phoenix police unit that’s tackling child sexual exploitation, offering an inside look at the lucrative industry through unique access to a series of undercover, high-stakes police operations. They also film with young women who have escaped the trade.

“Slavery sounds like a ‘back in the day’ thing, but … that’s kind of what it was,” Marriah, a young woman who was trafficked and sexually exploited for nearly four years, tells FRONTLINE. “Emotionally and mentally they have you in handcuffs.”

“When I began investigating sex trafficking in America, I had no idea how many victims were American themselves,” says the film’s Director, Jezza Neumann. “When I learned the scope of the problem across the nation, that’s when I knew this was an issue that demanded national attention.”

What’s revealed is a crime that’s both hidden in plain sight and growing – due in part to social media, where traffickers often start to groom and recruit young women and girls.

As the film reports, using fake, online ads as decoys, the Phoenix police unit targets both the traffickers luring young women into prostitution, and the “buyers” – many of whom claim to not know that the girls they interact with are victims of trafficking.

“Without customers, there’s no girls out there,” Detective Amber Campbell of the Phoenix Police Department says. She tells FRONTLINE, “People want to think that human trafficking only exists in foreign countries… there’s just a complete lack of education about the topic in our society.”

With extensive and intimate access to local law enforcement, prosecutors, service providers and the women themselves, the film shines a light on the hidden reality of sex trafficking in America.

“Society doesn’t want to have to recognize what’s happening to them. And it’s up to us to make sure that they do recognize it,” Detective Melissa Borquez of the Phoenix Police Department tells FRONTLINE. “No matter who they are, they deserve to have somebody fight for them, whether they want to be fought for or not.”

About FRONTLINE
FRONTLINE, U.S. television’s longest running investigative documentary series, explores the issues of our times through powerful storytelling. FRONTLINE has won every major journalism and broadcasting award, including 91 Emmy Awards and 20 Peabody Awards. Visit pbs.org/frontline and follow us on Twitter, Facebook, Instagram, YouTube, Tumblr and Google+ to learn more. FRONTLINE is produced by WGBH Boston and is broadcast nationwide on PBS. Funding for FRONTLINE is provided through the support of PBS viewers and by the Corporation for Public Broadcasting. Major funding for FRONTLINE is provided by The John D. and Catherine T. MacArthur Foundation and the Ford Foundation. Additional funding is provided by the Abrams Foundation, the Park Foundation, the John and Helen Glessner Family Trust, Heising-Simons Foundation, and the FRONTLINE Journalism Fund with major support from Jon and Jo Ann Hagler on behalf of the Jon L. Hagler Foundation.