THE FARTHEST – VOYAGER IN SPACE, a two-hour special about NASA’s historic Voyager mission to explore our solar system and beyond, will air July 31 at 10:00 p.m. on WOUB, in conjunction with the celebration of The Summer of Space on PBS. The documentary was an official selection in the 2017 Tribeca Film Festival as part of the festival’s Viewpoints program. 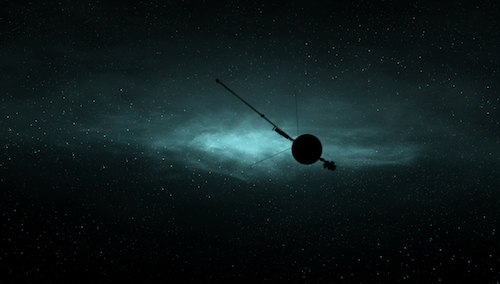 With participation from more than 20 of the original and current mission scientists, engineers and team members, THE FARTHEST – VOYAGER IN SPACE tells captivating tales of one of humanity’s greatest achievements in exploration. From supermarket aluminum foil added at the last minute to protect the craft from radiation; to the near disasters at launch; to the emergency maneuvers to fix a crucial frozen instrument platform, viewers get a sense of how difficult—and rewarding—space exploration can be.

Featuring a soundtrack of evocative period music including songs from Pink Floyd, stunning cinematography, vivid CGI animations of Voyager traversing the solar system, and original groundbreaking photographs taken by the twin spacecraft, the film tells the story of one of humanity’s most ambitious scientific endeavors. Voyager revolutionized planetary science, resolved key questions about the outer planets and raised intriguing new ones about the evolution of our solar system. Originally approved to travel only to Saturn and Jupiter, the spacecraft used gravity-assisted slingshot trajectories to take advantage of a once-in-176-year planetary alignment to extend their missions, with Voyager 2 also extending its mission to visit Uranus and Neptune.

After completing its mission to Jupiter and Saturn, Voyager 1 turned its camera inward and, at the insistence of the eloquent and insightful astronomer Carl Sagan, took one of the most famous images of Earth ever captured. As described by Sagan in the film, the image showed Earth as a pale blue dot on which “everyone you love, everyone you know, everyone you ever heard of, every human being who ever was, lived out their lives …on a mote of dust suspended in a sunbeam.”

The spacecraft, equipped with a fraction of the computing power of a modern cell phone, sent back unprecedented images and data from all four outer planets and many of their moons. As they continue their journey into interstellar space, they carry with them a literal record of our existence that may outlive us all. Sagan was one of the masterminds behind perhaps Voyager’s most iconic feature, The Golden Record, which carries greetings, music and images from Earth to intelligent beings they may one day encounter. THE FARTHEST – VOYAGER IN SPACE reveals how this famous record was created and how it presents humanity to any creatures that may find it.

“We’re living in an exciting time for space exploration, with new Earth-like exoplanets being discovered, manned missions to Mars on the horizon, and the search for extraterrestrial life being taken ever more seriously,” says executive producer Sean B. Carroll of HHMI Tangled Bank Studios. “And even though it launched 40 years ago, Voyager laid the foundation for so much of what we know about the outer planets and beyond. It’s an incredible scientific achievement, but also inspires us to reflect on our place in the universe and to imagine the implications of finding life on other worlds.”

“The men and women who gave birth to the Voyager mission are an extraordinary group of people whose passion and sense of curiosity are as eternal as the Voyager journey itself,” says producer John Murray of Crossing The Line Films. “We are incredibly grateful to them for sharing their stories with us and for bringing to life what it was like to create a scientific mission of literally cosmic proportions. This story is more than 40 years in the making, and there have been—and continue to be—so many firsts that Voyager remains as relevant now as it was when it was launched. The spacecraft are still inspiring people, still forging new frontiers of discovery and still sending back data that is changing our understanding of our solar system and beyond.”

Four decades after they left Earth, Voyager 1 has traveled more than 12 billion miles and Voyager 2 more than 10 billion. Both nuclear-powered spacecraft continue to send back data. In 2012, Voyager 1, which is traveling at more than 320 million miles per year, became the first human-made object to enter interstellar space—leaving our solar system behind and ushering humanity into the interstellar age.

“As America turns its attention to the stars and sky this summer, THE FARTHEST – VOYAGER IN SPACE will be a wonderful way to revisit how this incredible journey began, and to celebrate the men and women whose extraordinary vision will take us to the furthest reaches of the universe,” said Beth Hoppe, Chief Programming Executive and General Manager, General Audience Programming, PBS. “We hope it will encourage the next generation of scientists to continue to push the boundaries of what seems possible.”

THE FARTHEST – VOYAGER IN SPACE is a Crossing The Line film presented by HHMI Tangled Bank Studios in association with the Irish Film Board, ZDF, ARTE and the BBC. The film is written and directed by Emer Reynolds and produced by John Murray and Clare Stronge. Executive producers are John Rubin, Sean B. Carroll and Dennis Liu (HHMI Tangled Bank Studios) and Keith Potter (Irish Film Board). Executive in Charge for PBS is Bill Gardner.

The Farthest – Voyager In Space | Coming Wednesday at 10

PBS and Time Inc. Present BEYOND A YEAR IN SPACE, November 15