On Saturday, November 16, gamers of all ages and abilities can look forward to Play or Die, a daylong gaming event hosted by Ratha Con, Athen’s one and only pop-culture convention.

Play or Die is a day of gaming complete with tabletop board games, such as Dungeons and Dragons, as well as video games. Attendees can expect to play games from different consoles, computers, and try out some virtual reality games courtesy of the Ohio University GRID lab.

“This is the first year we’re doing Play or Die, and this will be Ratha Con’s ninth year,” said Alyse Carter, vice president and outreach and media coordinator of Ratha Con. “We decided we wanted to have a fall event to amp up our gaming community, so it’s an idea we’re trying out this year, we’re calling it a mini-convention.” 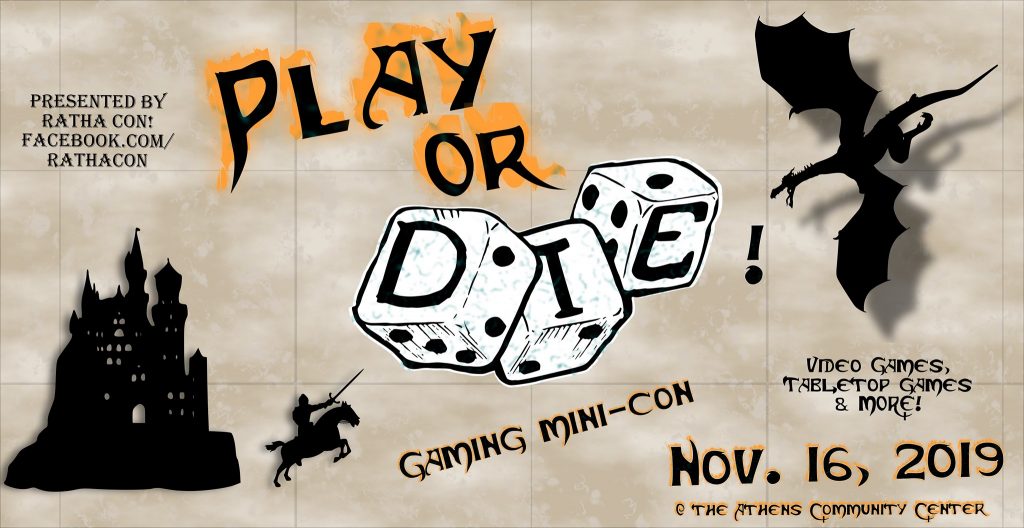 Due to table-top gaming’s recent increase in popularity, many people are seeking out groups to play these games with.

“Tabletop gaming, in particular, is really popular right now – with everybody watching Critical Role, or even in Stranger Things they were playing Dungeons and Dragons – it’s really interesting to us because we’re all nerds who have been playing D&D forever,” said Carter. “There’s a lot of people in our community who might not know about Ratha Con, or about other people who play those games. We’re trying to build up that community because it’s a big thing right now and a lot of people are into it.”

Along with Ratha Con and Play or Die, the people at Ratha Con also host bi-weekly gaming nights, typically on Tuesdays, which allows members of the community to get together to play tabletop games. A full list of event dates can be found on their Facebook page.

Play or Die welcomes gamers from all backgrounds – novice or advanced – to join them on November 16 at the Athens Community Center (701 East State Street) for Play or Die. The event will go on from 10 am until 8 p.m., and tickets can be purchased online. There will be concessions open as well with snacks and drinks for purchase.

2017 Ratha Con Set For May 13 at Athens Community Center