ZANESVILLE, OH – Jane Austen fans have always wondered what would have happened in her unfinished novel Sanditon. Those who attended a Jane Austen tea party at the John McIntire Library in Downtown Zanesville this past Saturday (January 11) got a sneak peek at one version thanks to WOUB Public Media.

“We were able to take the first hour of the two-hour premiere to the library in Zanesville on Saturday before the premiere aired and share it with those in attendance at the tea party,” said WOUB Community Engagement Manager Cheri Russo. “Many attended in formal dress wearing tea party hats. It was truly a fun event and a great way to celebrate the start of Sanditon.” 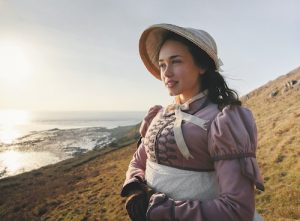 Jane Austen was chronically ill with a mysterious disease in early 1817, when she turned her thoughts to a happier subject and started work on a witty and delightful novel set in a seaside town. Austen died July 18, 1817 at the age of 41 and never finished it. Now, noted screenwriter Andrew Davies (Pride and Prejudice, Les Misérables, Primetime Emmy® winner for Little Dorrit) picks up Austen’s plot and takes it in a glorious and satisfying direction, on Sanditon. Produced by Red Planet Pictures, the eight-hour series premiered on MASTERPIECE on PBS on Sunday, January 12, 2020.

“It was great to see how those who attended the event reacted to the first-hour,” said Russo.  “They were truly sad when it ended and knew they’d have to wait until the next evening to see the rest.”

The storyline, as Austen left it in 11 beautifully crafted chapters, is as follows: Tom Parker (Marshall) is obsessed with turning the sleepy seaside village of Sanditon into a fashionable health resort, and he enlists the backing of local bigwig Lady Denham (Reid). Through a mishap, Tom makes the acquaintance of the Heywoods and invites their eldest daughter, Charlotte (Williams), for an extended stay at Sanditon. 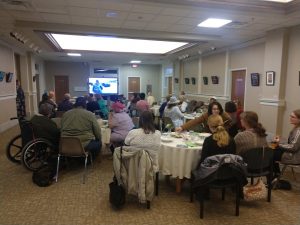 With many promising loose ends and romantic possibilities, how will the young people pair off? Who will Lady Denham designate as her heir? Will Tom’s tourist spa finally catch on with the public? Where will that lead? Andrew Davies imaginatively enters this world of Georgian-era suitors, hustlers, and health cranks and boldly tells us what happens next.

Sanditon on MASTERPIECE airs on Sundays at 9 p.m. on WOUB.

Winner of 83 Primetime Emmys® and 16 Peabody Awards, MASTERPIECE has been essential Sunday night viewing for millions of fans since 1971. Rebecca Eaton is the executive producer of the series. Funding for MASTERPIECE is provided by Viking and Raymond James with additional support from public television viewers and contributors to The MASTERPIECE Trust. Presented on PBS by WGBH Boston, MASTERPIECE is known for recent hits such as Sherlock, Downton Abbey and Victoria, and beloved classics such as Upstairs Downstairs, Prime Suspect, The Forsyte Saga and Poldark.

WOUB Features Summer Activities Across Ohio for the Whole Family