“One Child Nation” to Debut on PBS’S INDEPENDENT LENS, March 30 at 10 pm

The Acclaimed Documentary Exploring the Devastating Impacts of China’s One Child Policy to Make Broadcast Television Debut on March 30, 2020, and will be Available to Stream on PBS.org

China’s one-child policy, the extreme population control measure that made it illegal for couples to have more than one child, may have ended in 2015, but the process of dealing with the trauma of its brutal enforcement is only just beginning. From award-winning documentarian Nanfu Wang and Jialing Zhang, One Child Nation explores the ripple effects of this devastating social experiment, uncovering one shocking human rights violation after another — from abandoned newborns (almost always girls), to forced sterilizations and abortions to government abductions. 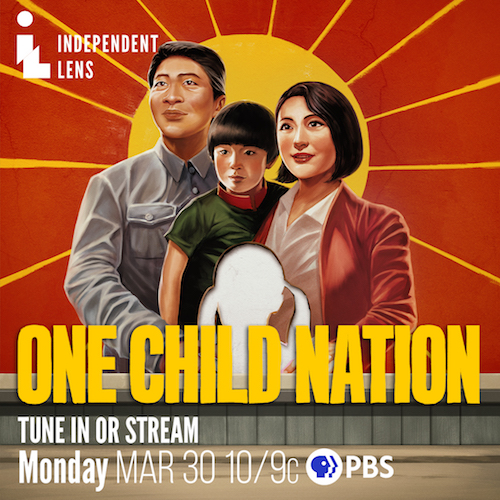 Lauded as “urgent and affecting” by Entertainment Weekly, “important” by the Washington Post, and a film that “needs to be seen” by the Wall Street Journal, One Child Nation will make its broadcast television debut on Monday, March 30 at 10 on Independent Lens on PBS, PBS.org and the PBS Video App.

As the film unfolds, Wang, a native of China, digs fearlessly into her own personal life, weaving her experience as a new mother and the firsthand accounts of her relatives with archival propaganda material and testimony from victims and perpetrators alike, yielding a revelatory and essential record of this chilling moment in human civilization. A steady presence on the awards circuit since taking home the Grand Jury Prize at the 2019 Sundance Film Festival, the film was also nominated for the International Documentary Association’s (IDA) Award for Best Documentary feature.

One Child Nation reveals how the Chinese government’s relentless campaign of propaganda brainwashed its citizens into committing unspeakable crimes and serves as a harrowing indictment of the mindset that prioritizes national agenda over human life. Featured is the midwife who delivered Nanfu and all of the babies in her village, who estimates that she performed 60,000 abortions while the policy was in effect. Most unsettling is the testimony of one of China’s most decorated family planning officials who, in clinical detail, explains how she executed her mandate.

Traveling from village to village, she sterilized women and performed abortions, many on women who resisted and had to be caught and restrained. But, “If I could go back in time, I would do it again,” she says in the film.

Many of the thousands of unwanted children born during the one-child policy era were abandoned, left in baskets by the side of the road or in the marketplace, and some were sold to orphanages through a nationwide impromptu human trafficking ring. Wang speaks with a journalist who uncovered this widespread corruption and with the founders of Research China, an organization whose mission is to reunite these abandoned, and later adopted, children with their families in China through DNA testing.

A common theme emerges throughout the documentary as Wang travels through villages in China, speaking with families whose babies were taken from them as a result of the brutal policy: they had no choice. Says Wang in the film, “when every major life decision is made for you, it’s hard to feel responsible for the consequences.”

“So much of my understanding of my rights as a woman was influenced by powerful government propaganda,” said Wang. “I’m grateful for the film’s success thus far in educating not just Chinese audiences, but audiences all over the world on the truth behind this policy, the corruption involved, and its ongoing repercussions for society. Public television has the power to take these stories into smaller communities across the U.S. that might not otherwise have the opportunity to hear them; my hope for our broadcast premiere is that it will help audiences everywhere understand what happens when you take away a woman’s choice, and remind them to always question the agenda of those in power.”

Visit the One Child Nation page on Independent Lens, which features more information about the film.

Won’t You Be My Neighbor | INDEPENDENT LENS | Saturday, February 9 at 8