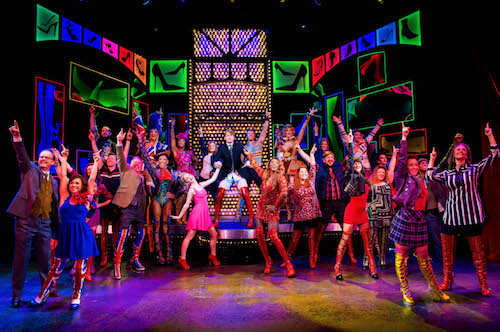 Kinky Boots is the 2013 Broadway blockbuster with music and lyrics by pop icon Cyndi Lauper, a book by Tony-winning theater legend Harvey Fierstein and direction and choreography by Tony winner Jerry Mitchell (“La Cage aux Folles”) that went on to pick up every major Best Musical award, including the Tony, the GRAMMY and London’s Olivier Award.

Based on true events, this big-hearted hit tells the story of two people with nothing in common—or so they think. Charlie is a British shoe factory owner struggling to save his family business. Lola—originally known as Simon from Clapton—is a fabulous nightclub entertainer with a wildly exciting idea. With a little compassion and a lot of understanding, this unexpected duo learns to embrace their differences and create a line of sturdy, stiletto-heeled boots for an entirely new clientele. In the end, their most meaningful achievement is their friendship. Great Performances presents the London production, featuring its original West End stars: Matt Henry in his Olivier-winning performance as Lola and Killian Donnelly as Charlie.

The Sound of Music | GREAT PERFORMANCES | Saturday, April 25 at 11 pm