Two-Part Biographical Documentary From the Award-winning
The Presidents Series

From draft dodging to the Dayton Accords, from Monica Lewinsky to a balanced budget, the presidency of William Jefferson Clinton veered between sordid scandal and grand achievement. Clinton, part of the Peabody Award-winning American Experience collection The Presidents, explores the fascinating story of an American president who rose from a turbulent childhood in Arkansas to become one of the most successful politicians in modern American history and one of the most complex and conflicted characters ever to stride across the public stage. It recounts a career full of accomplishment and rife with scandal, a marriage that 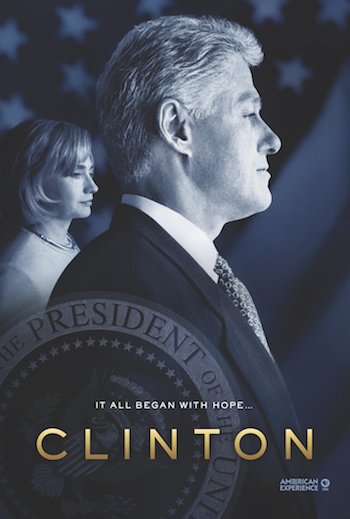 would make history and create controversy, and a presidency that would define the crucial and transformative period between the fall of the Berlin Wall and 9/11. It follows Clinton across his two terms as he confronted some of the key forces that would shape the future, including partisan political warfare and domestic and international terrorism, and struggled, with uneven success, to define the role of American power in a post-Cold War world. Most memorably, it explores how Clinton’s conflicted character made history, even as it enraged his enemies and confounded his friends. From Emmy and Peabody Award-winning director Barak Goodman (George W. Bush, Woodstock), Clinton will have an encore broadcast on American Experience on Tuesdays, July 21 and 28, 2020, 8:00-10:00 p.m. ET on PBS, PBS.org and the PBS Video App.

Part One follows Bill Clinton’s bumpy road to the 1992 presidential victory, an amazing triumph over repeated scandals and setbacks, through the first two years of his presidency.

From the political backwaters of Arkansas, Bill Clinton emerges as a political force unlike any seen on the national stage in a generation. Overcoming a troubled upbringing marred by alcoholism and violence, Clinton is determined from the start to succeed, first in Arkansas, then at Georgetown, Oxford and finally Yale. There he meets a young woman named Hillary Rodham who shares his intellect and idealism. Together they forge a marriage and political partnership that takes them to the Arkansas governor’s mansion and ultimately the White House, an election Clinton wins despite a campaign repeatedly under siege by allegations ranging from draft dodging to womanizing.

Although they have won the presidency, the Clinton’s have not yet won the country. Despite all of their education and experience, the Clintons are unprepared for politics in Washington, which quickly descends into open warfare with the Republican establishment and much of the media. The tumultuous first two years of the Clinton presidency see the beginning of the Whitewater scandal, the shocking death of Deputy White House Counsel Vince Foster, and the humiliating defeat of Hillary’s healthcare bill. Although the administration has its domestic successes, troubles brewing in the remote countries of Somalia and Rwanda and the arrival of a new and formidable rival named Newt Gingrich threaten to derail the Clinton presidency before it ever gets off the ground. When Republicans gain control of Congress in the midterm elections, the entire political landscape shifts to the right, leaving Clinton seemingly bereft of power.

Part Two – Shattered by the 1994 Republican victory, Clinton begins to sideline his most trusted advisors in favor of an aggressive political consultant named Dick Morris, who uses extensive polling to diagnose the administration’s weaknesses and develop strategies to correct them. The Republican “Contract with America” is riding high and by spring of 1995, Gingrich and his allies select the ground on which to wage their war: a plan to eliminate the federal budget deficit by drastically cutting Medicare and Medicaid. The plan leads to a government shutdown and slowly the tide begins to turn toward the president, who reclaims the political center with a stream of new initiatives that will curb big government and appeal to middle class families. Clinton wins the 1996 election in a landslide, pulling off one of the greatest turnarounds in political history. But events have been set in motion that will soon divide the country and nearly destroy Clinton’s presidency.

Clinton sails buoyantly into his second term: times are good, the economy is booming, and American prestige and power internationally are at an all-time high. Clinton’s dream of repairing the breach with Republicans seems within reach. But Clinton’s affair with Monica Lewinsky — a White House intern — becomes public after she confides in a co-worker named Linda Tripp. The ensuing scandal gives Independent Counsel Kenneth Starr the ammunition he needs to recharge his stalled investigation of the Whitewater affair. Congress initiates impeachment hearings, but the Republican leadership fails to remove Clinton from office. And when Starr’s damning report is finally released, the ire of the American public is focused more on the independent counsel than the president. Although Clinton survives the ordeal, confounding both his enemies and friends, he fails to reclaim the drive and zeal with which he began his presidency.