Coronavirus Cases Are Surging. The Contact Tracing Workforce Is Not

WASHINGTON, D.C. (NPR) — The United States needs as many as 100,000 contact tracers to fight the pandemic, the director of the Centers for Disease Control and Prevention told Congress in June. We need billions of dollars to fund them, public health leaders pleaded in April.

But in August, with coronavirus cases increasing in more than half of states, America has neither the staff nor the resources to be able to trace the contacts of every new case — a key step in the COVID-19 public health response.

Contact tracers call each person who has just tested positive and track down their contacts to inform them of their risk so they can quarantine. They also often connect people with services in order to safely isolate. It takes workers, time and organization, but it’s proven effective in controlling infectious diseases.

The new survey finds that as of the end of July, 45 states and Washington D.C., reported a workforce of 41,122. The real total is likely higher, since several states did not respond, despite multiple requests, and 12 states indicated that their counts exclude county and local staff.

“Slow-ish growth” is how Danielle Allen describes these workforce numbers. She’s director of the Edmond J. Safra Center for Ethics at Harvard University, and a co-author of a handbook of COVID-19 policy. “We’ve only gotten halfway to our national goal for the amount of personnel we should have in place,” she says. “One-hundred thousand [contact tracers] is the baseline the country needs and should always have going forward — forever. COVID or no COVID.”

Crystal Watson of the Center for Health Security, who collaborated with NPR on the survey, agrees. “Contact tracing seems to have stalled — or become less of a priority in many places,” she says. “That is — in a lot of cases — understandable, given the case numbers that we’re seeing, but I think it’s still very important to have these workforces in place.”

Only three states — Maine, New Hampshire and Vermont — along with Washington, D.C., currently have enough workers to investigate their coronavirus cases, according to an NPR analysis of how contact tracing staffing matches up with need. Three more states — Michigan, Montana and Hawaii — have enough when reserve staff are included. And 39 states do not have enough.

The analysis, based on state case counts over the past 14 days, was done using the Contact Tracing Workforce Estimator developed by The Fitzhugh Mullan Institute for Health Workforce Equity at the George Washington University. As in June, NPR assumed workers are calling 10 contacts per case and that tracers reach 45% of contacts and follow up with them every other day. It’s a conservative estimate, to reflect the real-world challenges health workers face.

High case counts in many states across the country are likely contributing to staffing shortfalls. In Texas, Florida and California, for instance, NPR’s analysis suggests around 30,000 contact tracers would be needed in each state to keep up with the current spread.

“It’s unreasonable to expect that sort of workforce,” Watson says. “What is really needed right now is for political leaders to take action to flatten the curve again — bringing those case numbers down to a place where we can meet the demand with the capacity for contact tracing.”

Nine states reported that they have had to adjust contact tracing operations because of a surge in cases or testing delays. Under those conditions, it’s much more difficult for health workers to identify people who might be infectious and prevent them from exposing others.

“Increasing case counts and turn around times are hindering our ability to slow the spread through contact tracing,” Jane Yackley of the Tennessee Department of Health, wrote in response to NPR’s survey. By NPR’s analysis, Tennessee would need seven times more contact tracers to keep up with the current amount of transmission.

In the midst of a case surge, other tactics may be more important — such as mask mandates, stay-home orders and closing or restricting business. But Watson is adamant that contact tracing is still critical in the long run. Right now, she says, “contact tracing is not ‘the answer’ — it is one tool that we have to have in order to manage the pandemic in an ongoing way.”

Contact tracing isn’t just a tool for slowing a virus’s spread, it’s also a valuable source of data about where transmission is happening, which can be used to inform policy and educate the public. But the majority of states NPR surveyed are not publicly sharing the contact tracing data they are gathering. 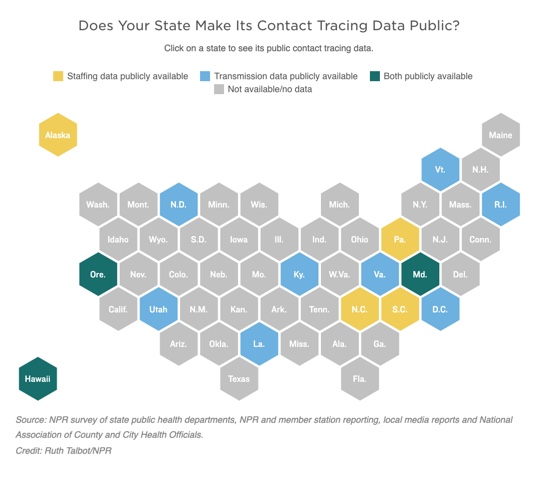 “There was a big push on testing data, there was a big push on demographic data,” Allen says, noting that the quality and transparency of public data in those two areas has improved a lot. Now, she says, contact tracing data needs a similar “serious push to get to a place where there’s a standard set of indicators being reported, and everybody understands it’s as important to report that information publicly, in the same way that you report testing information publicly.”

According to the survey, most states are gathering data about how quickly and completely contact tracers are able to successfully reach new cases and their contacts. This data can offer clues about when more tracers, or public awareness campaigns, are needed.

Just under half of states also reported collecting data about how many quarantined contacts end up testing positive for coronavirus, along with how many new cases are linked to known positives. That information — along with data gathered from conversations with contact tracers about where people think they may have been exposed to the virus — can give valuable insight into what is driving transmission.

“We’re all struggling to understand how to better control the spread of this virus,” Watson says. “I think one really important reason to share this information is so that others can learn from it.”

But only a handful of states reported to NPR that this information was publicly available on a government website. One of them was Utah — there, the public information on transmission shows that 65% of cases are linked to a known case, and of those, 59% came from household contacts, rather than a workplace or social settings. Louisiana’s public transmission information focuses on the location of community outbreaks, and shows that bars and restaurants are tied to the most outbreaks, though food processing outbreaks account for the most cases.

Allen notes that the public health system in this country is being pushed to adapt very quickly to the demands of the pandemic. “It takes work to keep your contact tracing programs going, to build up the expertise,” she says. “[We’re] taking a conventional public health technique and doing it at scale. I think of it as converting from using a network of country roads to using interstates.”

She adds that governments — from the federal to local level — have to do this work on top of continuing to build up testing capacity, developing effective therapies, and more. “It’s really hard work across a number of different dimensions,” she says. “And we really just need to get our minds and hearts around accepting that — and steel our wills to doing that hard work.”

WATCH: ‘Massive Numbers of People’ Needed to do Contact Tracing