Simmering Down During the Pandemic with a Chili Cook-Off

MANSFIELD, Ohio –– A small Ohio neighborhood gathered last week for a rare community moment after months of social distancing due to the COVID-19 pandemic. They held a chili cook-off ­­–– something that seemed very normal before March of this year but is a rare sight today.

Richland County, where Mansfield is located, has reported increases in the number of positive tests in recent weeks. Ohio, as a whole, has experienced record-breaking increases in the last month.

“It feels like there’s almost no end in sight,” Maggie Kaple, a recent Ohio University graduate and Richland County resident said. “Everyone needs a distraction from the madness; a way to feel less lonely –– even if it is only for a night.”

Eight families on Canteberry Lane brought various chili dishes with names like “JESUS SAVES (Room for this Chili),” “Sweet Heat” and “COVID-Chili.” The later presented in a crockpot with a blue-disposable mask attached.

“At a certain point, I think people have to be able to laugh,” she said. “It’s been almost seven months since this thing has started and you can see the whole situation take its toll on people who’ve been stuck in isolation.”

This marked the second annual “Canteberry Lane Chili Cook-Off”  — different from previous years, but   an event anticipated by its many participants. Questions such as “Do I need a mask?” or statements like “use a towel to handle the ladles” weren’t heard in the last competition.

Despite working in varied occupations from nursing to military service, those participating found common ground where the pandemic had changed their day-to-day lives. Many had kids in school who were still adapting to the new teaching styles.

The competition was considered lighthearted by most and voting was done with colored chips. Everyone had three votes for who they thought were best. Prizes and trophies were awarded to the top finishers.

Geoff Newland was this year’s winner. His day started with marinating and smoking a beef brisket, followed by searing bacon and then combining the meats with tomatoes, kidney beans, cumin, other spices and more while allowing the concoction to simmer for two hours before the festivities began. 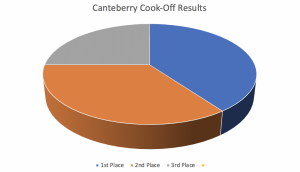 “It wasn’t about winning or losing,” Newland said. “It was great to win,” he joked, “but it was really just great to see these people in person who we’ve only mostly seen in passing or on neighborhood-Zoom calls at this point.”