LAWRENCE WELK: GOD BLESS AMERICA, one of the most dramatic patriotic music specials ever produced for public television, will be presented on Saturday, February 27 at 7:00 pm on WOUB. This two-and-a-half-hour PBS special pays a musical tribute to America’s freedoms, its leaders and its veterans, and to the patriotism Lawrence Welk held dear as part of the classic American success story of his life.

The special is co-hosted by Mary Lou Metzger and Tom Netherton and also features The Welk Champagne Music Makers under the direction of conductor John Bahler.

Act One of “Lawrence Welk: God Bless America” highlights 1900-1935, as Lawrence Welk and thousands of new Americans try to survive the hardships of World War I. Highlights of this act include the entire cast singing Irving Berlin’s rousing “This is a Great Country.” Guy Hovis performs “Coming to America” and Mary Lou Metzger, Jack Imel and Bobby and Elaine dance to a Cohan Medley. The Lennon Sisters sing, “My Man,” and Ralna English belts the Gershwin’s classic Broadway song, “Strike Up the Band.” Myron Floren and the Champagne Music Makers end this act with “The Battle Hymn of the Republic.”

Act Three looks at 1961-1981 as America faces tragedy at home and in Vietnam. Tom Netherton sings “You’ll Never Walk Alone,” and Guy and Ralna perform their acclaimed duet of “Let There Be Peace on Earth.” Anacani sings “From a Distance,” Dick Dale sings “Tie a Yellow Ribbon” and Joe Feeney performs an emotional arrangement of “Born Free.” The act ends with a dynamic piano duet as Jo Ann Castle and Bob Ralston play, “Stars and Stripes Forever.” 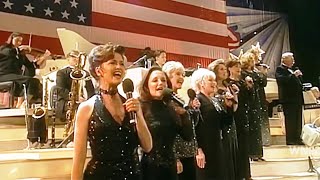 Act Four begins with Lawrence Welk’s retirement in 1982 and takes the audience into the present time of a national resurgence of patriotism. This act includes many heartfelt songs and readings, including “Ragged Old Flag” and “Let the Eagle Soar” by Guy Hovis, “The Pledge of Allegiance” by Mary Lou Metzger, “America the Beautiful” by Norma Zimmer, and “The Impossible Dream,” by Bob Ralston. Ralna English sings a heart-rending, special arrangement of “Amazing Grace.”

The finale features an emotional performance of “God Bless America” performed by Ralna English and the entire Musical Family, and accompanied by the Welk Champagne Music Makers.

Wings Over the Grand Canyon | Today at 11 am