ATHENS, OH – When Tracey Washington left Long Island, New York for Athens, Ohio in 1980, she planned to get the education and experience to return one day.

“I wanted to go to a college where I could get hands-on experience in journalism,” said Washington. “I realized that I could obtain valuable production skills during my freshman year at Ohio University and at WOUB. No other college or university would give me the experience I needed.”

Washington got involved at WOUB almost as soon as she got on campus. As a freshman, she started working on a WOUB AM radio program called New Black Directions.

“I became a co-host for the call-in talk show In-Conversation and eventually became an on-air personality for New Black Directions with student Program Director Kevin Harris. The talk show and music program aired on Sunday evenings.”

Washington learned that the students working at WOUB held each other to high standards, and that was because the WOUB professional staff made sure the students knew they were providing an important service to the region.

“I had a really tough boss. The legendary Connie Stevens,” said Washington. Stevens, a professional staff member who served as the WOUB AM program coordinator for 20 years, passed away in 2012. “She would burst into the studio if I wasn’t saying something correctly, and she pushed me to that next level. WOUB Radio Director Rusty Smith also encouraged me to  work on WOUB FM hosting bluegrass and country music programs. It was an honor to be that well-rounded. The music I was most familiar with was Gospel, R & B, Jazz and Hip Hop. I learned that I could go outside my comfort zone. I was also introduced to NPR. It was a phenomenal experience.” 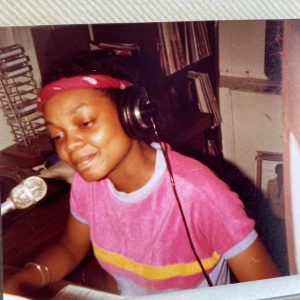 In addition, Washington worked as an on-air reporter in the WOUB newsroom and wrote for the Associated Press Bureau. Her training behind the scenes on the nightly WOUB television news program, NewsWatch, allowed her to obtain valuable television production skills.  She also eventually became the program director for New Black Directions.

“The wide variety of experience I got at WOUB propelled me into this field,” said Washington.

After graduation, Washington was hired first as a master control engineer at WXXI in Rochester, N.Y., then as an account executive at radio station WHLI/WKJY in Hempstead, N.Y., before getting her big break at News 12 Long Island.

“News 12 was launching a 24-hour TV news operation, and at that time, that was a new concept at the local level,” said Washington. “They hired me as a camera assistant. I was promoted to a live ENG truck operator and eventually moved my way into the newsroom becoming a production assistant, associate producer and then a producer.”

In 1990, Washington was hired at WPVI in Philadelphia where she produced the Emmy award winning teen program, Fast Forward. After Philadelphia, Washington was hired as a producer for WABC/Channel 7.  There she produced a weekend show called, New York Non-Stop and several station specials. Later she headed to Houston, Texas where she worked for KTRK/ABC and produced The Debra Duncan Show and later a national ABC mini-series, Houston Medical.

“It was great experience, but I was ready to head back home,” said Washington.

Famous New York Program Director Art Moore, who is known as the Executive in Charge of Live with Kelly and Ryan, was one of Washington’s mentors and in 2002, he brought her back to work in New York City at WABC.

“I was hired to produce Like It Is, the longest running magazine show in the nation focused on the African American community.”

In 2011, the show changed its name to Here and Now with Sandra Bookman. “I love producing this program. It has given me so many wonderful opportunities,” said Washington. “Since the debut of the program, I have produced several specials including, Journey to South Africa-Mandela’s Centennial which was nominated for an Emmy. I never imagined any of this!”

Washington has been nominated for 10 EMMY awards, winning six, and she credits it all to her start at WOUB and Ohio University.

“I was able to host a talk show with guests and focused segments. I was able to learn how to produce, perfect my on-air skills and obtain television/news production skills as a student at WOUB,” said Washington. “Today, I am able to connect with production crews in the studio and out in the field because I’ve been there and done that. WOUB gave me a well-rounded, job- ready experience. And that WOUB experience was never substandard to the industry. We were serious students working to do something great. We had a lot of responsibility. It was amazing.”