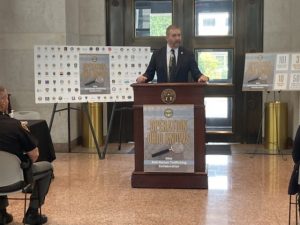 For the third year, law enforcement around Ohio conducted a human trafficking sting. And this time it turned out to be the largest one in state history, Operation Ohio Knows.

Republican Attorney General Dave Yost said 51 potential human trafficking victims were helped in and 161 men were arrested in 17 communities, including Elyria City Councilmember Mark Jessie, a firefighter, a teacher and a professor.

“We actually arrested a pilot who makes over $200,000 but not only was purchasing sex, but he haggled and got the price down to $15. We also arrested a guy with a two-year-old in the car,” Yost said at a press conference announcing the results of the sting.

Three men arrested were trying to buy sex from someone they thought was a minor.

Yost said this is the first time the sting has been conducted when the crime of buying sex is more severe than the penalty for trying to sell sex, so the focus of this sting was on arresting potential “johns”.

“We want to make the point that you’re not just going out there on a private thing between two consenting adults. You’re taking the risk that that person is being trafficked,” Yost said.

50 men and women offering to sell sex were also arrested. Yost says as a former prosecutor, he used to think those trying to sell sex should be arrested. He says some arrests do happen and can help get victims into treatment, but he’s changed his stance a bit.

“As I’ve gotten to know survivors that didn’t come through the system or came through the system and had difficulties, I’ve realized it’s a much more nuanced conversation,” Yost said. “But I think everybody in the conversation that’s actually familiar with this work recognizes that there are many, many roads to recovery and they don’t all look alike.”

Yost said 10 missing children were also found by the US Marshals Service.