For Katz, there was an eerie sense of déjà vu since Hurricane Katrina hit New Orleans on the exact same day 16 years earlier.

“To experience this twice in a lifetime, I’m too old for this,” said Katz with a chuckle.

Katz and his family opted to stay in New Orleans to ride out the storm, after missing the window to evacuate.

“By the time we realized we should probably leave, it was too late. The roads were going to be too congested, and it would take us too long to get out,” said Katz. “So, we stayed. After the power went out and we were in the dark, there were a lot of loud noises that were scary.  There were shingles and other things hitting the house. We knew our house was taking on some damage, but we didn’t know how much. However, at no point did we feel in danger.”

Lentes didn’t feel as if she was in danger either, even though she was out in it, covering the storm and all the damage it was causing. 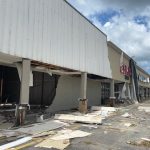 “There was one moment when I was getting ready to go live, and I could hear in my earpiece our meteorologist talking to the audience. I’d never heard that sort of fear in his voice before,” said Lentes. “Hearing someone I know, love and trust sound so concerned made me realize how serious a situation this was and how tough the people are who live in southeast Louisiana. I remember getting done with my live report and feeling a bit shaky. I looked around and thought that in eight hours’ time the area I am standing in might not be here anymore.”

Lentes was also thinking about how tough her mother was back home in Meigs County, Ohio. Lentes’ brother died in a tragic car accident in 2013. And Lentes knew that her mother had to be worried having her daughter in harm’s way.

“My mother is one of the toughest people I know. She was very worried and scared for me,” said Lentes. “She was already nervous having her daughter living 750 miles away. I almost didn’t move here because of my family and what they had already been through. So, it’s not lost on me what she must go through to let me have this career. But she wants me to live a full happy life, and I know seeing me live a full happy life makes her life that much better. Mom was proud of the coverage I provided to the people of Louisiana during Ida, and I know my brother would have been too.”

Katz owns a chain of restaurants in New Orleans called Dots Diner. When the sun came up after Ida had passed, Katz not only found damage to his home, but also to his businesses.

“We lost a substantial part of our roof at home. There was water intrusion, and mold must be dealt with now. There are carpet issues and wood flooring buckled in some other places. We have four older trees in front that were broken like toothpicks,” said Katz. “All of my businesses had pretty substantial damage. So, we are taking it one day at a time, trying to make a little progress every day. We had a lot of damage, but there are so many people, even in our neighborhood, that have it a lot worse than us. It’s going to take years to restore the city to what it was.”

Lentes is now covering the aftermath of the storm and the clean up for WDSU TV. And even though it’s hard to see the damage and devastation the storm caused, she’s proud to be doing this important work.

“This is why we got into journalism, when all hell is breaking loose, you want to be there providing information and helping the community,” said Lentes. “When I was a student at WOUB, there were days when I had to come to work at 5 a.m., and I would sit in the WOUB newsroom wondering what in the world I was doing. Then you realize that you are providing a valuable service to your community and how important what you are doing truly is. You realize this is what you are supposed to be doing, and the foundation came from WOUB.”

The Woman in the Iron Coffin | SECRETS OF THE DEAD | Wednesday, October 3 at 10

To Avoid A Hurricane, Couple To Wed In Hurricane