During the COVID-19 pandemic, nurses across the country have been heralded for their sacrifice and bravery while fighting on the front lines of a pandemic that has taken hundreds of thousands of lives. Coltin Gatts is a sophomore nursing major from Powell, Ohio. While completing his Ohio University coursework online and from home in the spring semester of 2020, he was also completing an internship at two local hospitals during the pandemic.

Gatts’ mother is a nurse, but he never thought about following in her footsteps at a young age. He credits witnessing his mother’s willingness to help others while on a family vacation with giving him his first true appreciation for the profession.

“This lady had cut her foot on a sea shell and people were just walking by. Then, my mom noticed. She ran up to the restaurant that was right up the beac 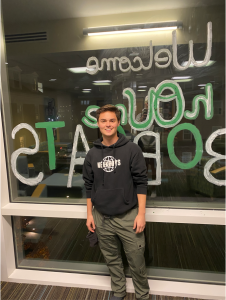 h, grabbed towels from their waitstaff and started applying first aid,” he said.

Still, Gatts wasn’t entirely sure he wanted to pursue nursing as his career, but when his school, and the rest of the world, was shut down due to the COVID-19 pandemic, he said he was inspired to make it his life’s work.

“When all this started happening, I switched my major from accounting to intended nursing,” he said. “My sister works at The Ross now, so she helped me get the [internship] there, and so when I was doing that, I was like: ‘Yeah I’m definitely doing this.’”

Gatts spent his internship splitting his time between the Richard M. Ross Heart Hospital and The Wexner Medical Center at The Ohio State University in Columbus, Ohio. He worked six hours a week in two-hour increments. While there, Gatts spent his time as “a gopher” as he puts it, while also gaining experience by observing how the full time nurses did their jobs.

“I worked the front desk, so I just checked people in every now and then. If they had enough people doing that, then I would be able to go and follow around an active nurse. She was a professor at OSU.”

“I’d follow them around and they’d be like, ‘Alright, this is how you’re going to check for blood pressure. We’re going to walk in this room and I’m going to do it, but just watch how I do it,’” he said. “Just stuff to get me more experience before I go into my clinicals.” 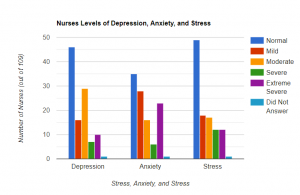 “I was passing out PPE at one point, so I was just sitting at a desk, I had all my protective gear on, and the nurses would just come flying over to me after going patient to patient. They were super stressed out so I was just trying to have everything set up so they could just grab the pile, go change, and then come back out,” he said.

“It was really putting a toll on the nurses for sure. They were stuck on a floor where there wasn’t much but misery and death. It was a very desolate area.”

Gatts said he remembers one instance in particular, where the stress of working in the hospital during the pandemic became too much for one nurse to handle.

“There was this one lady, she had just had a daughter recently, so she was just getting back in the swing of things. Then when it hit she was just moping around trying her best, but its a lot of moving room to room. She wasn’t prepared for that. It’s like an athlete in the off-season. They have to do the training to come back for conditioning,” he said. “Two weeks into it she was like ‘Okay, I can’t do this. I have a kid.’”

Gatts is continuing his studies at Ohio University in hopes of becoming a registered nurse. As he looks back on his internship as “not just work experience, but a life experience,” as he puts it. One that gives him a perspective that he feels is hard for a lot of people his age to grasp.

“Not enough people are going out and doing their own research or getting first-hand experience,” he said. “[People say] ‘Oh, well it doesn’t affect people 18-24 as bad,’ but it’s like ‘Yeah, but if you were the people that spread it the most, do you want to affect your grandma when you go home for Thanksgiving? You’ve got to try and think about other people.”

How Your Cellphone Is Ripping You Off!