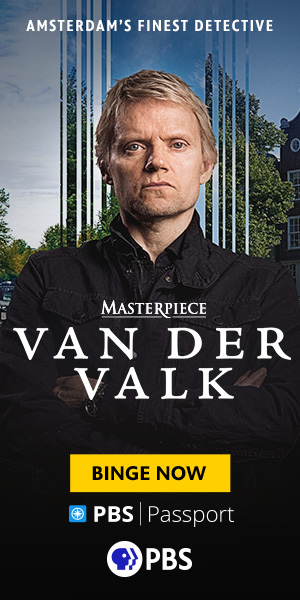 The wildly popular original series of Van der Valk starred Barry Foster and ran on British television from 1972 to 1992. Now Marc Warren steps into the role of the brilliant but cynical commissaris (inspector), solving baffling crimes in 21st-century Amsterdam, which is more prosperous, cosmopolitan, and crime-prone than ever.

Naturally, the characters have their personal issues. Most of the time Piet lives solo on an old sloop anchored in the harbor, where he wrestles with the painful memory of a lost love. Lucienne, too, has been thwarted in romance. De Vries has no ambitions beyond feeding his appetites, while Cloovers is overeager to excel at his new assignment. Chief Dahlman is recovering from a near-death experience on a previous case, and Hendrick has happily settled into Amsterdam’s guilt-free pleasures.

Together they face a trio of challenging cases that give a new slant to Amsterdam’s renowned sophistication, for it appears that the city’s stylishness and toleration go hand in hand with murder. Amid the canals, galleries, hip bars, and industrial
areas ideal for dumping bodies, Piet and his colleagues pursue the following investigations:

“Love in Amsterdam”
Saturday, May 14, 2022
Is Piet’s favorite Vermeer painting the key to two senseless murders and a suspected kidnapping?
Art, politics, and passion mix in a case that breaks in Piet’s new assistant, Cloovers, and also prompts discord with police chief Dahlman. Following up a lead, Piet’s sidekick, Lucienne, courts death. Meanwhile, a bitter political campaign counts down to a fateful election.

“Only in Amsterdam”
Saturday, May 21, 2022
A Muslim worker at an addiction clinic is found dead with a symbolic stab wound. Evidence
connects her to a rare books library where she researched religious erotica—an interest she shared with a Catholic nun. As investigators dig deeper, they enter a world of mysticism, alchemy, and the occult. On another front, Piet helps Lucienne deal with a romantic break-up, sparking rumors at the station.

“Death in Amsterdam”
Saturday, May 28, 2022
An eco-fashion vlogger turns up dead during his video feed. Fond of fashion himself, Cloovers takes special interest in the case, which uncovers a bitter rivalry between two firms dedicated to ultra-green clothing. In a parallel development, Piet and Dahlman confront the vengeful son of a corrupt cop that they previously put away. In a deadly denouement, fashionistas and fascist thugs tangle with Piet’s team.