The 33rd annual broadcast of America’s national night of remembrance “The National Memorial Day Concert” – May 29 at 8 and 9:30 pm

AN AMERICAN TRADITION
HONORING OUR SERVICEMEN AND WOMEN

The National Memorial Day Concert honors our country’s veterans, service men and women and military families. The concert unites the country in remembrance and appreciation of those who gave their lives for our nation and serves those who are grieving through the mission put forward by Abraham Lincoln in his second inaugural address, “Let us strive on to finish the work we are in; to bind up the nation’s wounds; to care for him who shall have borne the battle, and for his widow, and his orphan.” 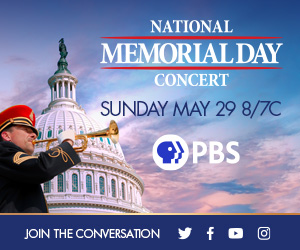 For over 30 years, this multi-award-winning television event, featuring uplifiting musical performances, documentary footage and dramatic readings, has become an American tradition and is one of PBS’ highest-rated programs. On the broadcast, celebrities share real-life stories spanning the broad history of our nation’s military conflicts, award winning musicians perform songs in tribute to our country’s true heroes and the finest performers from the United States premier military choirs and ensembles are featured.

The National Memorial Day Concert family has become a true community of support for our troops as a means of reaching out to soldiers, veterans and their families and letting them know we care.

A Tribute to General Colin Powell

For the past quarter of a century, General Powell was an important part of the National Memorial Day Concert, speaking to the nation about the sacred meaning of Memorial Day, reminding us of the debt owed to all those who made the ultimate sacrifice in defense of our liberty and freedom, and calling on the nation to help and support those who served and their families.

Each year, the concert remembers the fallen and their grieving families. In 2022, we share the story of Maj. General Mark Graham, USA (Ret.) and his wife Carol, who in under eight months suffered the loss of their two sons. 2LT Jeff Graham, killed in Iraq by an IED blast and Senior ROTC Cadet Kevin Graham, who lost his battle with depression. Their sons died fighting different battles, but both dedicated their lives to serving the nation.

In tribute to the over 58,000 American lives lost in the Vietnam War and the more than 3 million Americans who served in Southeast Asia during the brutal conflict, the concert will share the story of combat medic Francis Whitebird, a young warrior from a Lakota family with generations of military service.
Whitebird’s great-grandfather was an Indian scout for the 2nd Cavalry, his uncle fought in World War I, his father was a Lakota Code Talker during World War II, and both his sons served in the Iraq War.
During two tours in Vietnam, Whitebird endured combat losses and saved lives, received a Purple heart, and forged bonds of friendship that have lasted a lifetime.
Francis Whitebird will be honored for his service to his fellow soldiers and to our country. 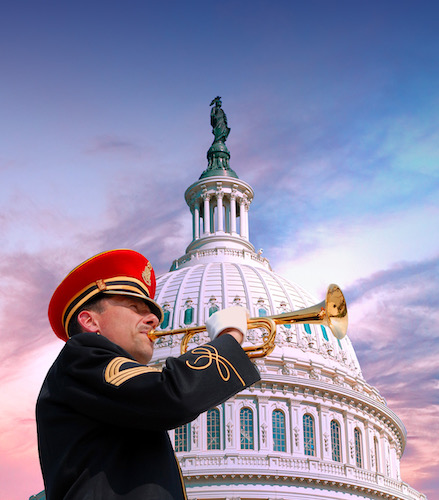 A Tribute to Women in WWII
The concert will honor and remember veterans of World War II, in particular the women who served the nation in many capacities, who will be in attendance.
For our nation, World War II began in December 1941 and ended in September 1945, with the final surrender of Japan. 16 million Americans served in uniform and more than 400,000 lost their lives in this epic war.
Millions of women played a critical role in helping attain America’s victory, serving their country here at home and on foreign soil.

100th Anniversary of the Lincoln Memorial
The concert will mark the 100th anniversary of the dedication of the Lincoln Memorial on the National Mall, reflecting on the meaning of Memorial Day.
Dedicated on Memorial Day, 1922, its symbolism and cultural significance over the decades cannot be overstated.  It is featured on the back of the $5 bill, was the iconic setting for Dr. Marin Luther King, Jr.’s “I have a dream” speech, and is visited every year by millions of Americans.

American Pops Orchestra Presents “ONE VOICE: THE SONGS WE SHARE” – Starting May 28 at 10 pm

The World’s Most Wanted Animal | NATURE | Coming Wednesday, May 23 at 8

The Gladden House Sessions Return For a Sixth Season