Following a trail of fossils found in all the wrong places in “Polar Extremes” on NOVA a two-hour special, Wednesday, June 15 at 9 pm

Hosted by renowned paleontologist Kirk Johnson, the special takes viewers on a dramatic and surprising adventure from pole to pole and back in time—650 million years ago to present day—to uncover the extraordinary story of the Earth’s poles and their changing climates.

Of all the fresh water that exists on Earth today, 70% of it is frozen, held in glaciers and ice caps, most of it in the Arctic and Antarctic—but Earth wasn’t always like this. Hidden in the rocks and trapped under the ice are clues that reveal a planet totally different from the one we know today. Following a trail of strange fossils found in all the wrong places—beech trees in Antarctica, alligators in the Arctic—Johnson finds evidence that the Arctic was once covered in a subtropical forest and dinosaurs once lived near the South Pole. A journey to the hot Death Valley desert uncovers rocks that could only get there by glacier, revealing another very different age, when ice sheets extended from pole to pole, turning the entire globe into a giant “snowball” Earth.

Featuring stunning footage from some of the most remote locations on the planet, combined with rich, 3D graphics of long-lost landscapes, POLAR EXTREMES immerses viewers in a scientific quest to explore the unexpected secrets of our planet’s polar past. Why were the North and South Poles virtually ice free for much of the last billion years?  Which triggers turned a balmy “Hothouse” Earth—home to dinosaurs for more than 150 million years—into a frozen “Icehouse” landscape?  What drives the poles to such extremes?  And, can the stories of the past reveal what will happen to the poles—and the rest of our planet—in the future? 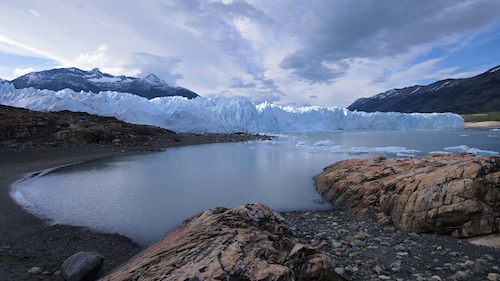 To search for answers, Johnson, the Sant Director of the Smithsonian National Museum of Natural History, travels back in time to find out what the Arctic and the Antarctic would have looked like millions of years ago. This epic journey takes him to some of the most remote places on Earth, featuring polar expeditions, white water rafting, helicopters, goldmines, rappelling into glaciers, fossil digs and more.

“This is a truly eye-opening trip through time, because the poles not only changed in the past, they’re changing today,” says POLAR EXTREMES executive producer Julia Cort. “What forces were at work then, when the Arctic was a swamp or when Seattle was under three thousand feet of ice? And what’s happening now? POLAR EXTREMES gives us an incredible opportunity to find potential parallels to our present—and future—climate story.”

Johnson and climate scientist Maureen Raymo uncover one possible parallel in a quarry in Virginia, where a backhoe unearths a treasure trove of fossils: clams and scallops that populated a shoreline three million years ago. The shells look amazingly modern—but dramatically out of place, since the quarry is now located 90 miles inland. It turns out that at the time these creatures were alive, there was no ice in the Arctic, causing sea levels to be substantially higher, and pushing the coastline inland. Raymo points out that during that period, carbon dioxide levels—one of the main factors determining global temperature—were about the same as they are today. 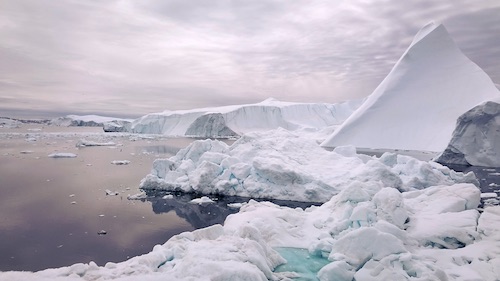 In the past, long before humans arrived on the scene, greenhouse gasses that warmed the planet came from natural sources. Johnson visits an active volcano in Mammoth Lakes, California to capture the CO2 still seeping from the Earth. Today, much of the carbon emitted to the atmosphere comes from another source: the burning of fossil fuels. Johnson dramatically demonstrates just how much carbon we’re adding to the air with the help of a 1965 Rambler convertible, a bag of charcoal briquettes (representing what Johnson calls “car turds”) and some provocative computer graphics.

With the planet now rapidly warming, a trip to the Canadian Rockies with paleoclimatologist Jeremy Shakun is especially striking, as Shakun leads Johnson deep into a cave inside the permafrost. Shaped by our current “Icehouse,” the walls of one small cavern are coated with sparkling, otherworldly ice crystals. But hanging from the walls in a deeper part of the cave are stone stalactites, created hundreds of thousands of years ago by water running through the ground—when the planet was warmer and the ground there was not frozen. Shakun notes that today’s permafrost holds about twice as much carbon as is in our atmosphere. If the permafrost thaws across all the frozen land at the Polar Extremes, a massive release of methane and CO2 will speed up global warming all over the planet—creating an unprecedented threat to humanity.

POLAR EXTREMES shows that the Earth’s distant past is directly relevant to our collective future. “Humans are geology, and we are impacting this planet,” says Johnson. “This is the first time that a mammal has actually changed the composition of the Earth’s atmosphere and driven a dramatic change in the Earth’s climate. The question is, are we clever enough and forward-thinking enough to flip that switch back?”