Final performance of the “Ukrainian Freedom Orchestra” to be broadcast Friday, September 9 at 9 pm

Final Performance of the

to be Filmed at the Kennedy Center for Broadcast on PBS

The John F. Kennedy Center for the Performing Arts, the Metropolitan Opera and PBS announce that the final performance of the Ukrainian Freedom Orchestra will be filmed for broadcast on PBS. The Ukrainian Freedom Orchestra, gathered by the Met and the Polish National Opera, is comprised of recent Ukrainian refugees and other artists in a gesture of solidarity with the victims of the war in Ukraine. The orchestra will embark on a European and American tour on July 28 that culminates with a performance at the Kennedy Center Concert Hall on Saturday, August 20.. The broadcast version of the performance premieres on September 9 on PBS, PBS.org and the PBS Video app.

“This remarkable ensemble is a testament to the power of artists and the arts to affect change and uplift the voices of those fighting for freedom. We are honored, as America’s national cultural center, to join with our friends at PBS and the Metropolitan Opera to bring this concert and the stories of these brave artists to the world,” said Deborah F. Rutter, President of the Kennedy Center. 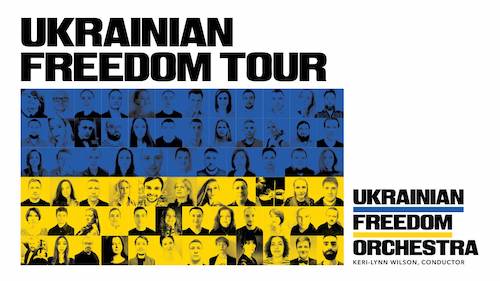 “We’re extremely proud to share this powerful program with audiences across the country on broadcast and streaming platforms,” said Paula Kerger, CEO of PBS. “The arts are unmatched in their ability to bring people together and highlight our shared humanity, and I hope that by spotlighting the vibrancy and talent of these Ukrainian artists, we can enable a deeper understanding of the situation in Ukraine.”

The orchestra includes recent refugees; Ukrainian members of European orchestras, including the Tonkunstler Orchestra of Vienna, the Belgian National Orchestra and the Royal Concertgebouw Orchestra; and musicians from the Kyiv National Opera, National Symphony Orchestra of Ukraine, Lviv Philharmonic Orchestra and Kharkiv Opera, among other Ukrainian ensembles. The Ministry of Culture and Information Policy of Ukraine is supporting the project by addressing the organizational issues of allowing male musicians to put down their weapons and take up their instruments in a remarkable demonstration of the power of art over adversity.

Leading Ukrainian soprano Liudmyla Monastyrska will also perform Leonore’s great aria “Abscheulicher!” from Beethoven’s Fidelio, a paean to humanity and peace in the face of violence and cruelty.

The assembling of orchestras in the face of violence and in the name of peace has a long tradition. The Israel Philharmonic Orchestra has its roots in an ensemble founded in Palestine by Bronisław Huberman in the 1930s to help rescue Jewish musicians in Europe from the Holocaust. The West-Eastern Divan Orchestra, founded in 1999 by the conductor Daniel Barenboim and the Palestinian scholar Edward W. Said, brings together musicians from Israel and Arab nations. The Afghanistan National Institute of Music, long a target of the Taliban, had sent ensembles out into the world before the recent Taliban takeover of the country.