Explore the fight against Asian American hate in “Rising Against Asian Hate: One Day in March” – Oct. 17 at 9 pm

In March 2021, a 21-year-old man murdered eight people, including six women of Asian descent, at three spas in Atlanta, Georgia. The shooting was a watershed moment in a year of increasing violence against Asian Americans and Pacific Islanders (AAPI). For many, the tragic events became a galvanizing moment, reigniting a sense of collective identity and political engagement within AAPI communities. Now, as violence against AAPI people continues to surge nationwide, a new one-hour documentary chronicles the troubling escalation of hate and spotlights the movement to turn grief and anger into action. Rising Against Asian Hate: One Day in March premieres on Monday, October 17 at 9 p.m. on PBS, pbs.org/RisingAgainstAsianHate, the PBS Video App and on the PBS YouTube channel. 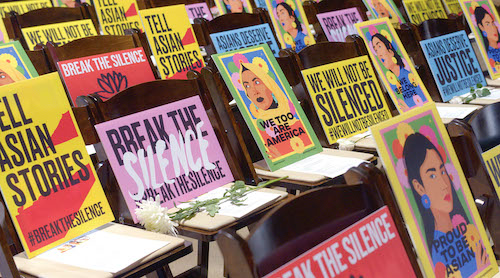 “The tragedy of the Atlanta shootings and the events of the past two years has compelled a deep reflection within the community about our place in the American polity. It has galvanized the Asian American community to speak up and speak out,” said Titi Yu, Director of Rising Against Asian Hate.

“We watched in horror and shock as vicious attacks on Asian Americans were caught on camera and we saw how this violence escalated to the killing of six women of Asian descent in the Atlanta shooting,” said Gina Kim, Executive Producer of Rising Against Asian Hate. “With this documentary we hope to examine this troubling escalation of racism against the AAPI community, pay respect to the lives lost and impacted by the violence, and champion those coming together to fight against the hate.”

“The rise in anti-Asian hate incidents over the past few years has been unlike anything we’ve seen in the 42 years that CAAM has been supporting Asian American stories,” says Center for Asian American Media Director of Programs Donald Young. “With so much attention focused on the accused shooter in Atlanta, this film is a necessary, in-depth look at the stories behind the victims and the effects on the community.”

“We are pleased to bring this critically important film to audiences nationwide,” said Lesley Norman, Executive Producer of National Programming for The WNET Group. “It is essential to our mission to present content that reflects and represents the experiences of people across our nation. We hope this film will help to advance social justice and understanding through education.” 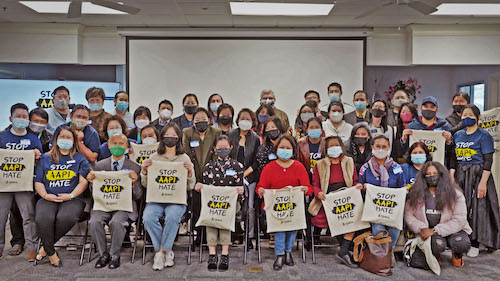 “The shocking events that took place in Atlanta, and the acts of violence that continue to take place in communities across the country, are tragic and unthinkable,” said Margaret Ebrahim, Senior Director, General Audience Programming at PBS. “Rising Against Asian Hate epitomizes PBS’s mission to produce trusted, thought-provoking content that goes beyond the surface level; to provide a platform for discussion, and to foster a culture of understanding about issues that ultimately impact us all. PBS is honored to present this film.”

The film is part of The WNET Group’s Exploring Hate: Antisemitism, Racism and Extremism, a public media reporting initiative examining the roots and rise of hate in America and across the globe. To compliment Rising Against Asian Hate, the Exploring Hate digital series be/longing: Asian Americans Now profiles Asian American trailblazers from across the country in five stories of belonging and exclusion; resilience and hope; and solidarity in the face of hate. Rising Against Asian Hate filmmakers Gina Kim and Titi Yu are the subjects of episode five of be/longing and shed light on what they discovered about the AAPI community in the face of anti-Asian violence.

Rising Against Asian Hate: One Day in March is produced by Repartee Films, LLC in association with the Center for Asian American Media (CAAM), with funding provided by the Corporation for Public Broadcasting (CPB), and The WNET Group for PBS.