Brian Stokes Mitchell joins the choir for “20 Years of Christmas with The Tabernacle Choir” – Dec. 24 at 8 pm

“So much effort and creativity went into preserving this beloved tradition—now 20 years strong—in the middle of a global pandemic that has disrupted so much,” said Brian Stokes Mitchell. “I am honored to be a part of it. Not only will viewers enjoy a behind-the-scenes look at what it takes to produce the most watched holiday special on PBS for 16 years, but they will also be able to feast on all of the wonderful moments this holiday special has delivered over the past two decades and remember how music connects people in very profound ways.”

This special two-hour “20 Years of Christmas with The Tabernacle Choir” retrospective replaces the traditional TV special that would have been created from a live Christmas concert in 2020 that had to be cancelled due to COVID restrictions. In new segments filmed in November 2020 (following COVID protocols), Mitchell joined a handful of socially distanced Orchestra members and the Choir’s musical director Mack Wilberg in an empty 21,000 seat Conference Center on Temple Square in Salt Lake City to record intimate Christmas classics. The Choir also joins Stokes and the Orchestra in its first-ever all virtual performance. 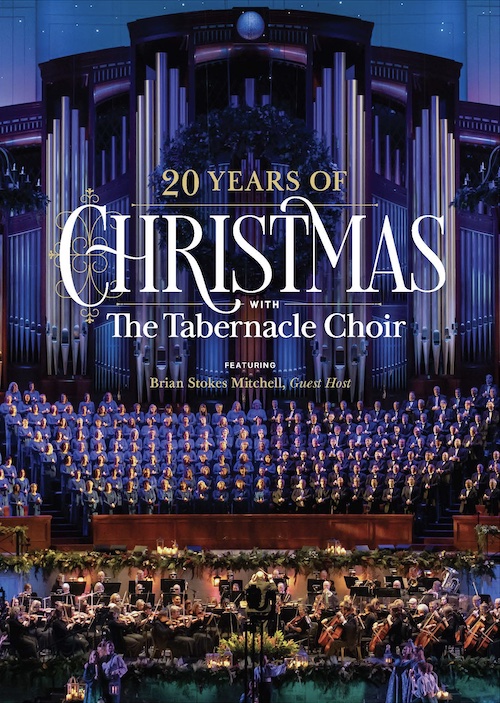 In addition to the musical performances, which reflect a variety of musical styles and traditions from around the world, the special highlights the range of past narrators who have joined the Choir and Orchestra to tell the stories of Christmas, including Hugh Bonneville (“Downton Abbey,” “Paddington”), John Rhys-Davies (“The Lord of the Rings,” “Indiana Jones”), Jane Seymour (“Dr. Quinn, Medicine Woman,” “Somewhere in Time”), Richard Thomas (“The Waltons,” “The Americans”), the late Ed Hermann (“The Lost Boys,” “Annie”), legendary news broadcasters including the late Walter Cronkite and Tom Brokaw and more. Together with the music, these standout moments help tell the storied history of this beloved institution, which every year celebrates the love, spirit and peace of the season.

“Due to COVID-19, we couldn’t have the in-person audience we always do, but the lockdown gave us a chance to provide audiences at home something different than they would experience in a normal concert year,” said Wilberg. “Because of the remarkable breadth of material we have from 20 years of Christmas concerts, there will be something for everyone in this retrospective, making it a wonderful way to celebrate and emphasize the true meaning of Christmas. It’s always a joy working with Brian Stokes Mitchell, who is not only a consummate performer, but also a warm and incredible person—qualities that comes across in everything he does. We are so pleased he is the one to tell the story of this concert tradition.”

Tony Award-winner Brian Stokes Mitchell is an accomplished actor, singer, musician and arranger. Mitchell received Tony, Drama Desk, and Outer Critics Circle awards for his star turn in “Kiss Me, Kate.” He also gave Tony-nominated performances in “Man of La Mancha,” August Wilson’s “King Hedley II,” and “Ragtime.” In 2016, he was inducted into the Theatre Hall of Fame and received his most recent Tony Award for his work as Chairman of the Board of The Actor’s Fund, a position he has continuously held since 2004. He is also on the Board and Artist Committee of Americans for the Arts and is a founding member of Black Theatre United.