Does Your Chewing Gum Lose its Flavor on the Bedpost Overnight?

Do you recall that catchy tune? I have actually left gum on my bedpost to prove or disprove if the flavor did leave overnight. What was my result? It was the same in flavor the following morning, except, the elasticity was gone.

Fun experiment, but, chewing gum is actually more than a sugary novelty. My son brought home a book from library day at school and it was about chewing gum. Wait, I thought, is there enough information about gum to encapsulate in hard cover? Yes! The sticky-sweet stuff that is pressed in to the undersides of tables and chairs, intentionally left on the sidewalk for a passersby to annoyingly goo-through actually had its beginning from the human need to chew. By the way, a patent was awarded in December of 1996 for a biodegradable gum that would eliminate sticking. This elastic wonder can be pink, purple, yellow, green, white, blue or red in color. It is sweet, cool, minty, stretches endlessly, fruity, loses its flavor after the first bubble or lasts for hours. Chewing and breaking down the gum spawns flavors of cherries, watermelon, fresh spearmint, bananas, and cinnamon. Gum pops, crackles and sparks memories of who can blow the biggest bubble. 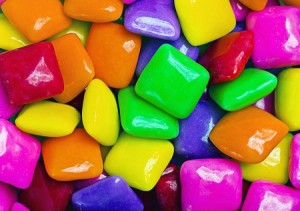 If you believe that chewing gum is from the imagination of Willy Wonka then let me take you on an interesting journey of the Sapodilla tree and the Maya, a pioneer family from Maine, a dentist, a traveling salesman, a Mexican general and a New Yorker.

History documents that humans have been in the habit of chewing on naturally produced materials such as: thickened resin and latex from certain types of trees, various sweet grasses, leaves, grains and waxes. Why do we do this? The reasons for chewing are broad. As long as 9,000 years ago chewing birch bark for medicinal purposes (relieving toothaches) and enjoyment was common amongst Northern Europeans. Ancient Greeks, for centuries, chewed on mastic gum (also known as, mastiche, pronounced mas-tee-ka) that is from the resin held within the bark of the mastic tree found in Greece and Turkey. Grecian women, specifically, used the mastic gum to sweeten their breath and clean their teeth. Ancient Maya chewed a substance called chicle that is extracted from the sapodilla tree and used to combat hunger and extinguish thirst. The Indians of North America chewed spruce tree resin and this practice was passed on to the European settlers. The Aztecs created rules for chicle social acceptability in regards to who could chew and when. Chicle is the milky juice, or latex, of the sapodilla tree that is prevalent in the tropical rain forests of Central America; mainly in Mexico, Guatemala and Belize. Single women and children were permitted to chew in public; men were permitted to chew in secret to clean their teeth; and, married women and widows could chew privately to freshen their breath.

Who was responsible for putting gum on shelves? In 1848, pioneer family from Maine worked with the resin from spruce trees, but, they never got a patent. In the early 1860s a chicle-based gum entered the United States. The popularity increased and so did the demand. Chicle suppliers realized that once a sapodilla tree was tapped it then needed an average of four to eight years to recover before the next tapping. When this demand could not be met manufacturers then turned to synthetic methods, such as paraffin. Discovered in 1830, paraffin became an option due to it being: colorless, odorless, tasteless and abundant. However, just like anything else, others tried for a bigger and better product. In December of 1869, an Ohio dentist, by the name of Dr. William Semple, was honored with the first patent to manufacture gum. He combined rubber, sugar, licorice and charcoal developing a product used for jaw exercise and gum stimulation. Unfortunately, Dr. Semple was so busy with his dental practice his efforts did not progress. This duo of inventors, a Mexican general named Santa Ana and a New Yorker named Thomas Adams, tried to sell chicle to rubber manufacturers as a cheap “get rich quick scheme” but it never amounted to anything. Santa Ana left the business, but, Adams stayed on another year to experiment with licorice and the outcome was a gum of huge success and what we know of as Black Jack gum. The 20th century was very good to this next inventor, and, genius of marketing, by the name of William Wrigley, Jr. Gum was a pastime for the traveling soap salesman. With every order of soap Wrigley would give business owners a supply of baking powder. Eventually, the baking powder became a bigger seller than the soap; he sold that instead and included complimentary packages of gum. Wrigley became famous for a mile long sign advertising Wrigley gum posted along the New Jersey railroad and a flashing billboard over Times Square.

As time went on the gum market was saturated and that led to intense competition. This competition led to the creation of bubble gum by Mr. Frank Fleer whose company had already been selling regular gum since the late 1800s. Fleer was determined to create a new product that would outshine his competitors and could be blown in to bubbles. Blibber-Blubber was invented in 1906; unfortunately, the product was too sticky. Twenty-two years later Mr. Walter Diemer, an employee of Fleer’s, was successful with the first commercial bubble gum and we know that product to be Dubble Bubble.

Gum of the modern age certainly has not gone out of style and has expanded in variety filling display racks in front of every cash register in every convenience, pharmacy and grocery store. Depending on their condition or preference, consumers are also offered “ORGANIC GUM” and “DIET GUM” and “SEX GUM” and “NICOTINE GUM.” Perhaps Willy Wonka was on to something with his concept of gum that tasted like a three-course meal…tomato soup, roast beef and blueberry pie. For me, just a half stick to freshen or some Double Bubble please!

Sources: YouTube video on the history of gum; Wrigley.com; The History of Gum from history.com. Courtesy given to Will Kyle for bring his library book home from the Alexander Elementary School Library.