Paramedics and police are already in the hotel room when Kyle Simpson walks in.

“What happened?” he asks.

A 37-year-old man in the room is barely conscious–just revived by the overdose reversal medication NARCAN.

Law enforcement officers survey the scene. They’ve found more heroin “rocks” on a table. One officer interviews a crying woman who was with the man when he stopped breathing.

“He overdosed on heroin. He snorted it,” a paramedic responds.

Simpson is an Operations Major with Louisville Metro’s Emergency Medical Services. He says this won’t be the only scene like this tonight due to the opioid crisis.

“It has taken effect, and it has got a hold on this city.”

First responders like Simpson have learned a lot about how to deal with the epidemic. But he says he could use more data to better track overdoses.

“We could maybe establish patterns and maybe put an end to this.”

The Louisville Metro EMS is moving to new data tracking technology to make better use of the information they get from each overdose call.

“We need to know let the hospitals know that they’re going to be seeing an increase,” Public Information Officer Mitchel Burmeister said. “We need to make our EMS responders aware and our police and fire responders aware. And then we need to get the word out to the community.”

After a spike in overdoses earlier this year, federal officials approached LMES about adopting a program created by the Washington/Baltimore High Intensity Drug Trafficking Area.

The new program —provided at no cost to Louisville Metro– will have first responders enter accurate data into an easily navigated interface. That will update the agency’s private database in real time.

“We want to make sure that the data that we are collecting for this heroin epidemic is consistent and coordinated,” Burmeister said.

Louisville’s project is among a handful of efforts in the Ohio Valley aimed at filling surprising gaps in the information available about the scope and impact of the crisis. For all the attention the epidemic has received, timely, reliable data are often lacking.

A presidential commission on the opioid crisis includes a recommendation to improve data sharing in its interim report released this month, and health researchers are warning that a lack of good information could hinder the response to the crisis and lead to poor decision making.

Public health researchers have started to sound the alarm about impediments to information vital to their work to better understand the opioid epidemic and inform public policy decisions.

Researchers say federal funding cuts threaten some important national data sets and others are not being regularly updated. Some information sources kept by law enforcement agencies are not made available to researchers. 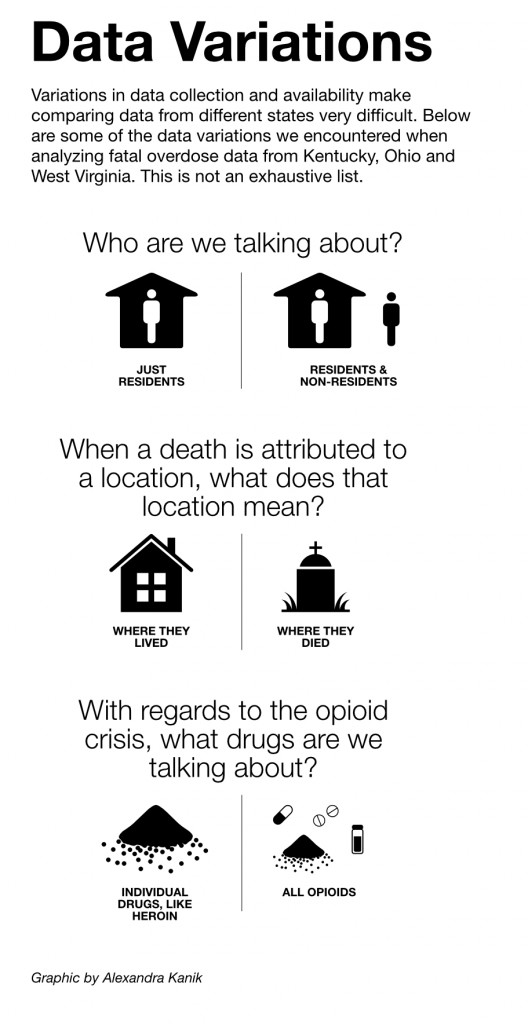 Dan Ciccarone with the University of California San Francisco has studied heroin use for nearly two decades. He said that in that time it has become more difficult for him to get law enforcement information on the type and nature of drugs agents have seized.

“We need some cross-pollination,” he said. “We need to get the information to other people.”

Law enforcement and public health researchers both want to find solutions to ending the opioid crisis. But they don’t speak the same language when it comes to their methods.

Ciccarone said enforcement agencies have the raw data researchers need to study things such as the potency and production of heroin. But the agencies tend to keep that information to themselves, perhaps out of concern that drug users or producers might exploit it.

“Maybe you don’t tell the users, then,” Ciccarone said. “Maybe you just tell emergency doctors. They might want to know if a new brand of fentanyl came in last week. All I’m saying is, we’re not doing enough.”

Other numbers gathered by state and county governments are often simply not timely or complete enough to keep up with the pace of a rapidly changing epidemic.

For example, data on overdose deaths in Kentucky, Ohio, and West Virginia are presented on different time periods and levels of detail. Overdose victims might be identified according to place of residence in one set of data, but by place of death in another. Different state agencies also follow different criteria for reporting information about the specific drugs involved in an overdose case. Such inconsistencies make it tough to get a full, regional picture of the toll the epidemic is having.

An innovative project in Cincinnati shows how better data can help.

The city’s Open Data Portal gathers data from various departments in order to track everything from government spending to trash pickup.

As part of the public CincyInsights online project, a team led by the city’s Chief Performance Officer Leigh Tami designed an interactive map that showed the overdose EMS calls by neighborhood while protecting private information.

As in Louisville, the idea first came after a dramatic series of overdose events in 2016. Originally, Crowley said, the city simply wanted citizens to see what was going on in their neighborhoods. But then local entities combating the opioid crisis took an interest in the data.

By tracking the times that overdose calls came in, first responders were able to look for patterns and anticipate when they need staff on hand. By tracking locations of the calls, the city hopes people who lead treatment programs will learn where their services are needed most.

“We recognize a visualization is not a panacea for this epidemic,” Crowley said. “But we realize that it can be used as a tool to help us lessen the number of events.”

The project has gained attention from outside Cincinnati as well, with other municipalities inquiring about how they could set up their own system.

The city hopes to add new data sets to the page. By teaming up with area hospitals and treatment centers, for example, they could track the outcomes of overdose events and the effectiveness of treatment.

States are making efforts to fill in the data gaps as well.

Part of the office’s responsibilities will be to create a data repository in order to seamlessly share data among multiple state agencies.

“This will help us surpass a couple of the challenges that we have identified over the past few years in being able to both collect data in a uniform basis as well as then report it out in a timely and transparent manner,” State Health Officer Dr. Rahul Gupta said.

Many agencies across the bureau are collecting different data sets related to understanding the problem. But Dr. Gupta would like to see them more aggressively assimilate data related to prevention and treatment.

The agency recently did a study on a May, 2016, event in Huntington in which 26 people overdosed in the span of a few hours.

“What data will help us with is to be able to create programming for individuals that fits the needs of individuals.”

Dan Ciccarone said this type of data will be essential to getting a well-rounded look at the opioid crisis.

For example, Ciccarone said, a new white powder version of heroin is coming from Mexico. But with researchers being denied access to data — like that from the old System to Retrieve Information from Drug Evidence or the new the National Seizure System — the public won’t know how deadly the substance could be.

“For all we know, that alone is dangerous.”

Without a better understanding of the drugs, Ciccarone believes the approach to the crisis will continue to be reactionary, rather than proactive.

Researchers writing in a 2015 white paper identified a dozen data sets that were severely lacking just regarding the use and abuse of prescription opioids. Those included information categories such as “Thwart Rate of Forgery and Doctor Shopping Attempts” and “Prevalence of Drug-Seeking Behaviors.”

The authors of the white paper called on a “variety of sources, including federal agencies, proprietary systems, national organizations, academic institutions, industry, and state and regional government agencies” to step up their efforts to collect much needed data.

The new information systems in cities like Louisville and Cincinnati won’t fill every gap, but here in ground zero of the nation’s opioid crisis, every bit of data helps.

Cost Of U.S. Opioid Epidemic Since 2001 Is $1 Trillion And Climbing