The cool, green, vibrant canyons and caves of the Hocking Hills are under threat by a tiny, invasive bug.  The trees that cling to the cliffs of the Hocking Hills are mostly Eastern Hemlocks.  These hemlocks are being attacked by an insect with a cute name and deadly consequences: The Hemlock Woolly Adelgid.  This insect attaches to the base of the hemlock leaves and slowly feeds on the energy reserves of the tree.  After a few years of infestation, the tree will die.  Since hemlock trees grow all over the crags, cliffs, and boulders of the Hocking Hills, significant hazards would be created in the parks if these trees died. 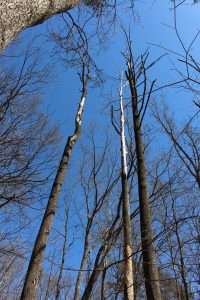 The Hemlock Woolly Adelgid came to the United States from Japan in the 1950’s, spreading from Raleigh, North Carolina to the Great Smokey Mountains.  The insect population proliferated when the adelgid arrived in the large hemlock forests of Eastern Tennessee and Western North Carolina.  Adelgids can reproduce a-sexually, meaning they do not need a male and a female to reproduce.  A single female adelgid can produce 60,000 fertile replicates of herself each year. 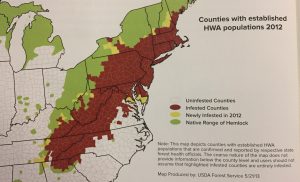 The adelgid arrived in Ohio in 2012.  Efforts are being made to educate residents and property owners to spot the adelgids on their hemlocks.  In the winter adelgids create visible fuzzy white masses at the base of green hemlock needles.

If hemlock woolly adelgid is spotted, people can contact officials who will monitor the situation and/or treat the trees through chemical or biological approaches.  Chemical treatments treat individual trees like a booster immunization.  Biological treatments involve predator beetles from the West Coast who will eat the adelgid beetles and their eggs.  Treating small populations will help to prevent their spread. 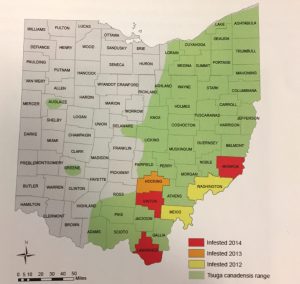 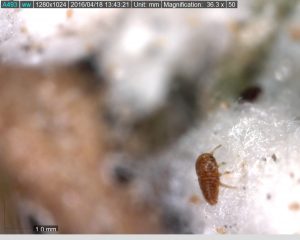