A woman’s place is on the throne.
Victoria, Season 2 on Masterpiece
Starring Jenna Coleman as the young queen, wife, and mother in an all-new season of Victoria
Premieres January 14, 2018 on MASTERPIECE on WOUB

Jenna Coleman (Doctor Who) returns for a new season as the young queen who wants it all—romance, power, an heir, and personal freedom—on Victoria, Season 2, airing in seven episodes created and scripted by bestselling novelist Daisy Goodwin (The Fortune Hunter), premiering January 14, 2018 on MASTERPIECE on PBS.

More than 16.2 million viewers tuned in for Victoria’s premiere season, making it the highest-rated drama on PBS in 20 years—second only to Downton Abbey.

Joining the cast in the new season is legendary actress Dame Diana Rigg (Game of Thrones, The Avengers), who plays the Duchess of Buccleuch, the court’s new Mistress of the Robes —a fount of old-fashioned good sense for the queen, who is now in the throes of motherhood.

Tom Hughes (Dancing on the Edge) stars as the queen’s smoldering consort, Prince Albert. Also returning from last season are Rufus Sewell (Man in the High Castle) as Lord Melbourne, Victoria’s first Prime Minister and intimate friend, Nell Hudson (Outlander) as Nancy Skerrett, newly promoted to the queen’s chief dresser, whose secrets are yet to be revealed, and Ferdinand Kingsley (Borgia) as Charles Francatelli, the royal chef whose love for Nancy was spurned at the end of Season 1. 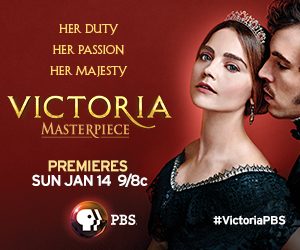 And, of course, the costumes and settings enchanted all: “A lavish production with impeccable period details,” penned Newsday.

Victoria’s new season sees the return of Nigel Lindsay (Rome) as Sir Robert Peel, the reforming British prime minister, at odds with his sovereign over policy; Catherine Flemming (No Place to Go) as the Duchess of Kent, Victoria’s manipulative mother, still battling her headstrong daughter; and Peter Bowles (To the Manor Born) as the Duke of Wellington, the hero of the Battle of Waterloo, now a retired prime minister and sage mentor to the queen.

Also back are Adrian Schiller (Beauty and the Beast) as Penge, the irascible head steward at the palace; Daniela Holtz (The Forest for the Trees) as Baroness Lehzen, Victoria’s devoted governess since birth; and David Oakes (The White Queen) as Prince Ernest, Albert’s debauched older brother, who becomes Duke of Saxe-Coburg and Gotha on the death of their equally promiscuous father, played by Andrew Bicknell (The Royals).

Season 2 finds Victoria adapting to motherhood after the birth of her first child, a daughter (to the disappointment of many). Meanwhile, the disaster of the Anglo-Afghan War unfolds abroad, and the catastrophic Irish potato famine begins to wreak havoc. In other foreign affairs, a royal state visit to France is in the offing.

Most intriguing to Prince Albert is the budding Industrial Revolution, which is now sweeping England. There is Charles Babbage’s mechanical calculator, a collaborative project with the bewitching Ada Lovelace, daughter of the scandalous Lord Byron. Then there is William Fothergill Cooke’s miraculous electrical telegraph, not to mention Marc Isambard Brunel’s daring—and dangerous—Thames Tunnel.

What an extraordinary time to be Queen!

Victoria, Season 2 is a coproduction of Mammoth Screen and MASTERPIECE. It is created, written and executive produced by Daisy Goodwin. It is being executive produced by Mammoth Screen Managing Director Damien Timmer, Kate McKerrell (Lost In Austen) and once again produced by Paul Frift (Room At The Top) for Mammoth Screen. Rebecca Eaton is the Executive Producer for MASTERPIECE, presented by WGBH Boston. Directors for the series are Lisa James Larsson (Striking Out), Geoffrey Sax (Tipping The Velvet), Jim Loach (Oranges And Sunshine) and Daniel O’Hara (The Game). Victoria is distributed internationally by ITV Studios Global Entertainment.