The 45th annual Athens International Film and Video Festival (AIFVF) will take place April 9-15, with the dozens upon dozens of screenings taking place at the Athena Cinema on Court Street, and a number of affiliated celebratory events taking place throughout the city of Athens.

The festival is a little bit like a major holiday for movie buffs. Literally hundreds of movies, all of them selected by festival executive director David Colagiovanni and his hordes of undergraduate and graduate film students over the course of the year, are shown in blocks at the Athena Cinema. Student admission is free, and the festival is an Oscar qualifying film competition.

Every year the festival brings impressive guest artists to the Ohio University campus, and this year is no different, featuring the likes of artistic pioneer and musician Laurie Anderson, avant-garde interdisciplinary artist Joseph Keckler, and experimental non-fiction filmmaker Laura Kraning.

“I am really excited to see Laurie (Anderson),” said Katey Jo Henry, a junior screenwriting producer major and one of the students in Colagiovanni’s Film 4440 Film Festival Practicum class. It’s early afternoon, and several students from Colagiovanni’s undergraduate classes are gathered in the Central Classroom building on Union Street in Athens on the outskirts of the academic Athens campus. Henry said that she had never heard of Anderson before taking the class, but that the lead up to the festival only increases her excitement for meeting the artist in person.

The festival itself is intended to expose audiences to a variety of films that come from a wealth of vantage points; the event has long been heralded for its spotlight on artwork made by marginalized groups.

A huge portion of the Film Festival Practicum class is made up of screening the many submissions the festival receives, allowing for students to chime in on how they feel about each work.

“Watching the films that are submitted really gives you a better feel for what the film community is doing right now, about the consciousness of the film community,” said Tanner Bidish, another junior enrolled in the class. “You can feel what is happening in the film community better through the short, small independent works that we screen than you do just by keeping up with the Oscars.”

Bidish said that he is particularly excited for The Cinema Travelers, a Cannes Film Festival award-winning documentary that chronicles the travelling film lorries of India, which bring films to rural villages. It should be noted that the feature is in competition at AIFVF. 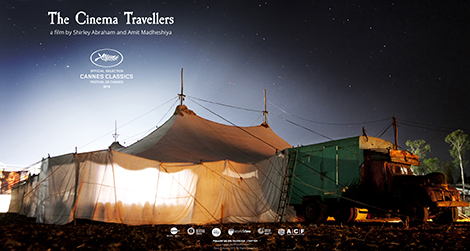 “It’s a movie about movies, and it is a foreign film and a documentary, two types of film that I don’t get to see enough,” he said.

Another one of Colgiovanni’s undergraduate students, Madison Eblin, a senior in Journalism and Spanish, said that she is looking forward to the screening of RBG, a documentary about Supreme Court Justice Ruth Bader Ginsberg.

“This is my third semester helping out (with the film festival),” said Eblin. “It’s really cool seeing behind the scenes at a film festival. In the fall semester you watch a lot of movies, and in the spring semester you help out with the festival, so you get to see the two sides of producing the event.”

Carrie Love is a third-year graduate student in Ohio University’s MFA in Film program, and her experimental work Swimming will debut at the festival on Saturday, April 14 at 9 p.m. as a part of the “Moon in Pisces” block of short films in competition. Colagiovanni’s MFA students also work the film festival tirelessly throughout the duration of the event, oftentimes being allowed to miss class in order to participate in the festival.

Love said that since it is her final year in the program she plans to spend as much time at the festival as possible.

“I see some strong similarities between the Nelsonville Music Festival and the (AIFVF),” said Evan Hamilton, another undergraduate senior and one of Colagiovanni’s students. “If you go to a music festival, you may have never heard of more than half the acts, but when you go to the festival, you discover music that is new to you, and it’s the same way with the film festival, you are exposed to media that you wouldn’t have been exposed to otherwise.”

The festival is all at once one that highlights films from outside of the mainstream and that makes those works accessible to those who may not typically be exposed to any media from outside of the mainstream. For example, on the opening night of the festival, Farmsteaders, a documentary about regional dairy farm Laurel Valley Creamery, will be shown.

“We try to feature movies that are about where we are, and Farmsteaders is a beautiful example of that,” said Colagiovanni. “It’s showing at the festival will be the documentary’s world premiere, and it’s a movie that tells a story about people who live here in Appalachia in a fantastic way.”

Other films that are being screened at the festival that tie directly into the region include a historical documentary about the 1930 Millfield mine disaster that took the lives of 82 men, The Mothman of Point Pleasant, which chronicles the legend of nearby Point Pleasant, WV’s most fascinating monster, and The Devil We Know, a documentary about the Parkersburg, WV-based DuPont corporation’s knowing use of the chemical C8 to poison the population near their plant while making Teflon products.

“I’m from Gallipolis, which has a similar socioeconomic standing to Athens in terms of poverty, and as someone who was a kid in this area, I know that a lot of my peers did not get to see different kinds of film while we were growing up,” said Hamilton. “And they didn’t get to see how easily film can be made, there are a lot of low-fi pieces in the festival. So just the fact that the festival is accessible to kids in this area is huge, it’s something that broadens their horizons in terms of their understanding of what the potential for their lives are.”

One of the festival’s free events, which is entirely open to the public and easy to access on the Ohio University Athens campus, is Laurie Anderson’s VR exhibition, entitled Chalkroom. The exhibition is located in the GRID Lab, E.W. Scripps Hall Room 216-230. The work is by Anderson and Hsin-Chien Huang, and it utilizes virtual reality technology to allow words to literally soar through the air and fall to the ground to dissolve to dust.

“The school of theater is working to design a set for the exhibition, and it will be set up pretty much exactly how you would ordinarily experience it in a museum,” said Colagiovanni. “The exhibition is closed on Thursday, but other than that it is open regular hours and is free and open to the public throughout the festival. This is our first time doing a virtual reality piece, and it seems appropriate that it is Laurie Anderson’s.”

There will also be a number of afterparties throughout the week, each of them organized by Brian Koscho, marketing director for the upcoming Nelsonville Music Festival, and sponsored by the festival.

“We had worked with David (Colagiovanni) in the past to help out with little things throughout the film festival, just as any arts organization would, but this year he approached me and asked if we, as the Nelsonville Music Festival, could book and present the afterparties, and I jumped at the opportunity,” said Koscho. “Just personally I have always listened to lots of different kinds of music, but I have been interested in experimental music for years and years, and this seemed like a cool opportunity to push the envelope a little bit and present some different sorts of events.”

Some of the unconventional uses of performance and space include a 78 rpm listening party at the West End Ciderhouse on Wednesday, April 11 at 9 p.m., a mid-week evening of regional music in Ohio University’s Galbraith Chapel on Thursday, April 12 at 9:30 p.m., an Athens noise show reunion at ARTS/West on Sunday, April 15 at 7:30 p.m., and more.

“At the risk of being too general, I would say that something that there is something special Athens International Film and Video Festival and the Nelsonville Music Festival, although obviously one is about film and the other is about music. Both take place in a county of 60,000 that is sort of tucked away in the foothills, and both bring the unexpected,” said Koscho. “There is a lot of commonality, and my only guideline in booking and arranging the afterparties for the film festival was to make sure that I didn’t do anything that was too normal — nothing that was just a rock band playing or a singer-songwriter playing. We still have those things taking place, but they take place in unusual spaces in the middle of the week, I worked to make sure that everything was framed in an interesting, different sort of way.”

For a full listing of AIFVF events, check out the festival’s website. WOUB Culture will be covering the festival all week long, so keep tabs on us at @WOUBCulture and on Facebook.