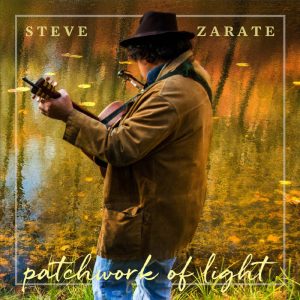 From the opening harmonica wheeze of “Heralds of the Dawn” to the melancholic lilting of a toy piano on closer “Happen In a Heartbeat,” Athens’ Steve Zarate’s most recent release, “Patchwork of Light” illuminates both the joyful and painful, the clearly evident and cleverly hid, pockets of human experience all in a palette of simple instrumentation. The album was woven together over the course of many years, with some of the first recordings dating back to 2012, and the writing of the songs dating back even further.

”The record is an hour long, which some people might say is too long for a record, but it’s really split into two parts, with tracks one through seven, and then with a little six-second space after the seventh track,” said Zarate, who produced the album with engineering help from Rusty Smith. “That little break is kind of like an album flip, if the album was on a record. Both of the sets of songs start out on a minor chord, and resolve into major chords, so I guess that is a little bit like darkness coming into light, which exemplifies the healing message at the heart of this album.”

Listen to WOUB’s Emily Votaw’s interview with Zarate above. The album is available for download at this link.

Steve Zarate On Challenges Faced By Musicians During COVID-19 Outbreak