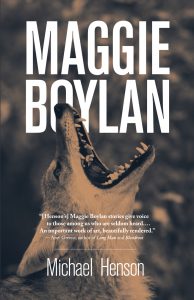 According to the National Institute on Drug Abuse, there were 3,613 opioid-related overdose deaths in Ohio in 2016. That harrowing statistic is made up of mothers, brothers, daughters, grandparents, cousins, as opioid addiction continues to prove to be one of the most pervasive afflictions of the 21st century.

“Maggie Boylan” is a volume of multi-layered short stories that circle an opioid addict, named Maggie Boylan, stumbling through the court and treatment systems in search of some kind of recovery. The book, re-printed by Swallow Press earlier this year, was written by Michael Henson, a writer at heart who spent decades as an addiction counselor and community organizer. WOUB’s Emily Votaw spoke with Henson about the writing of “Maggie Boylan,” how he defines recovery, and what lies at the heart of the opioid crisis.

W.Va. To Receive $14.6M From Feds To Fight Opioid Addiction