New research this month shows that West Virginia and Kentucky have some of the nation’s worst rates of student loan defaults. 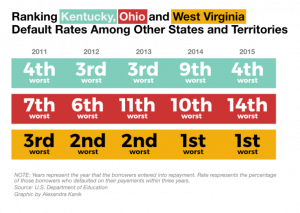 West Virginia had the highest and Kentucky the fourth-highest rate of student loan defaults, according to data released by the U.S. Department of Education.

In West Virginia, 17.7 percent of students who entered loan repayment in 2015 had defaulted three years later. New Mexico and Nevada were second and third, and Kentucky came in fourth, with 14.3 percent of students unable to pay back their loans. At 12.2 percent, Ohio ranked near the middle, tying Michigan for 14th place.

The rates refer to the total number of people who took out loans and the percentage of that number who missed nine consecutive student loan payments.

Economists in West Virginia and Kentucky say the high default rates reflect the rising costs for college, stagnant wages for many entering the workforce, and budget cuts that target higher education.

Ashley Spalding, a senior policy analyst at the left-leaning Kentucky Center for Economic Policy, said the cost of college is rising but wages are not keeping pace.

“When you really look at what’s happening with Kentucky, we have a lot of people living in poverty, having trouble making ends meet,” Spalding said. “We’ve seen tuition just skyrocket in recent years, but wages aren’t really going up for most people.”

Sean O’Leary, a senior policy analyst at the West Virginia Center on Budget and Policy, said a decade of tax and budget cuts had resulted in less funding for higher education.

Schools with the highest default rates tended to be for-profit schools and community colleges; at Kentucky’s worst-performing school, Southeast Kentucky Community and Technical College, nearly a third of borrowers couldn’t pay back their loans.

Spalding said it wasn’t surprising that the state’s worst-performing school was in rural eastern Kentucky. “Where people live in Kentucky affects their access to jobs,” she said. “Our rural areas are more economically challenged right now.” 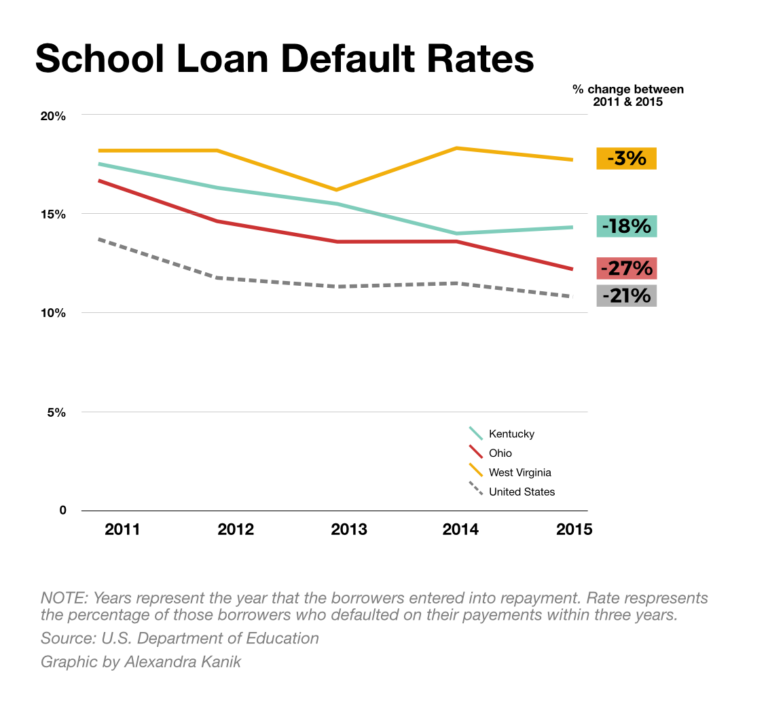 Separate research from the Federal Reserve Board has shown that student loan debt makes it less likely for borrowers to become homeowners, an important way that Americans build wealth.

According to the Department of Education, the national average for student loan default stood at 10.8 percent, down from 11.5 percent last year. The national default rate has been trending down since 2010, when it peaked at 14.7 percent.