In 1967, Emma “Grandma” Gatewood became the first person to solo thru-hike the entire 2,170 miles of the Appalachian Trail. She did this at the age of 67, armed with only a bare minimum of supplies and a desire to achieve a goal.

“I’m not so sure that she was walking towards something so much as she was walking away from what had been a terrible life,” said Ben Montgomery, author of the New York Times best-selling book Grandma Gatewood’s Walk: The Inspiring Story of the Woman Who Saved the Appalachian Trail.

On Thursday, October 4 at 9 p.m., WOUB-HD will broadcast Trail Magic: The Grandma Gatewood Story, a documentary that explores the Grandma Gatewood story, from her origins in Gallia County, Ohio, to her lifetime of hardships, including a 30-year marriage to the viciously abusive (and publicly elected mayor of Crown City, OH,) Perry Clayton Gatewood, to her eventual stardom following the completion of her enormous hike.

Montgomery, who is also a Pulitzer-prize nominated journalist, will speak about his in-depth research into Gatewood’s life and legacy for his book at WOUB’s finale event for The Great American Read, a PBS program that has been celebrating some of America’s favorite books since May. The event is free and open to the public will take place at 3 p.m. in the Baker Center Theater on Sunday, October 21. 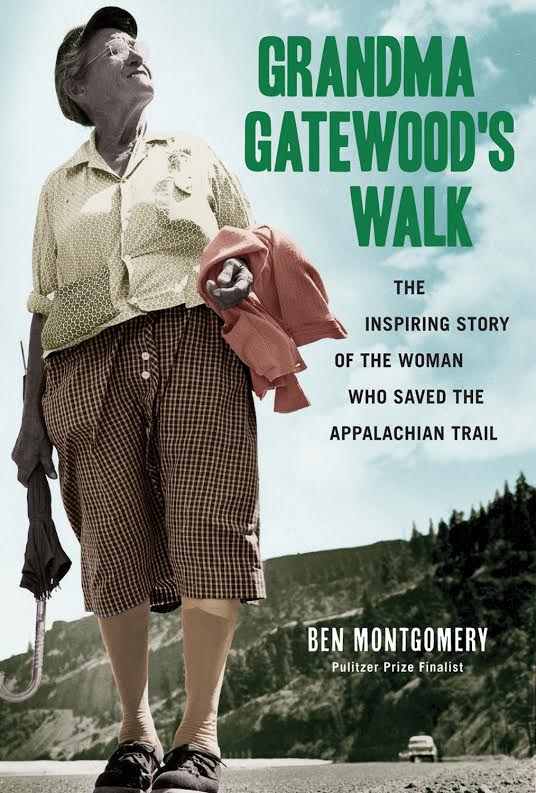 Montgomery learned of the Grandma Gatewood story in an unusual way.

“(My mother) would tell bedtime stories as I was growing up about this relative of ours who was the first person to solo hike the Appalachian Trail, and I remember as a kid being fascinated with that story, even if I didn’t understand what a significant role (Emma Gatewood) had in American History and in the history of the A.T. (Appalachian Trail),” said Montgomery, whose great-great aunt is Emma Gatewood. “I had been at my newspaper job for about 15 years when a story of mine got some attention, and a book agent called me and told me ‘I really like your writing style, and I was wondering if you had any book ideas?’ One of the first things that bopped into my head was a serious biography of Emma Gatewood. I searched around to see if anyone had done that, and nobody had, so I saw that as my opportunity, and I was off to the races.”

Throughout his research for the book, Montgomery paged through hundreds of pages of Gatewood’s trail journals, her letters, her scrapbooks, and even a four-page autobiography that Gatewood wrote. He had access to these materials through Gatewood’s surviving children, one of whom, Lucy, was a resident of Jacksonville, Florida, when Montgomery began his research.

“When I got to (Lucy’s) home in Jacksonville, I didn’t know what she had, but it turned out that she was actually sort of the keeper of the flame, and that she had gone great lengths to preserve her mother’s legacy,” he said. “I couldn’t have done the book without that, so thank goodness Lucy kept that.”

Montgomery’s book explores Gatewood’s life in its entirety, including her terrifying relationship with her aforementioned abusive husband, in a time when domestic abuse was not spoken about, let alone acknowledged as violence that should be severely persecuted and certainly make someone unfit for public office.

“Thank goodness (Gatewood’s) children had solid memories of (the abuse their mother endured) and were unafraid to recount their own experiences,” said Montgomery. “From the first year they were married, P.C. Gatewood would beat Emma consistently and severely, sometimes almost killing her. In 1941, she took a beating that was so bad that she realized that if she stuck around, he was going to kill her, so she filed for divorce – as rare as that was in the ‘40s, and she was granted one.”

Montgomery believes that Gatewood’s abusive marriage was a tragic, but necessary, part of her story.

“I make the argument, in the book, that those experiences were formative for her, that they shaped who she was and who she would become,” he said. “Interestingly, oftentimes when her husband would beat her, (Emma) would flee to the woods to escape him, and take refuge there. If you read any of her work, you start to understand that the woods, the forest, nature, was her refuge and where she could find peace of mind. While some of us might be afraid of insects and snakes and bears, she found the woods be a friendly place, which made a hike of 2,000-plus miles all the more palatable – she was having fun hiking, and that was where she was meant to be.”

Gatewood’s walks were not free of dangers, however. On numerous occasions she was faced with incredibly difficult weather, including walking through back-to-back hurricanes that took the lives of over 200 people on the east coast; a rattlesnake strike; encounters with bears, and much more.

It should be noted that Gatewood’s successful thru-hike of the Appalachian Trail in 1955 was not her first attempt at making her way through the entire length of the trail.

“I make the argument, in the book, that those experiences were formative for her, that they shaped who she was and who she would become. Interestingly, oftentimes when her husband would beat her, (Emma) would flee to the woods to escape him, and take refuge there. If you read any of her work, you start to understand that the woods, the forest, nature, was her refuge and where she could find peace of mind. While some of us might be afraid of insects and snakes and bears, she found it to be a friendly place, which made a hike of 2,000-plus miles all the more palatable – she was having fun hiking, and that was where she was meant to be.” – Ben Montgomery, author of Grandma Gatewood’s Walk: The Inspiring Story of the Woman Who Saved the Appalachian Trail.

“The first time (Gatewood) attempted the walk, she was ill-prepared, and she started in mid-summer in Maine – and there is a 100-mile wilderness, some of the worst terrain on the trail, that she had to get through, so she had set herself up to fail,” said Michelle Houts, author of When Grandma Gatewood Took a Hike, a children’s picture book about Gatewood’s life published by Ohio University Press in 2016. “After a few nights, she was lost and had been bitten by blackflies. Thankfully, the trail service had noticed that an elderly woman had checked in at one of their stations, but hadn’t checked into the next station, so they sent out a search party to find her. When they found her, they told her ‘go home, grandma.’”

Houts said she always emphasizes to young readers that while Gatewood did fail on her first attempt, she did spend time planning a better strategy to successfully tackle the trail less than a year later.

“This is a story of perseverance, and I always ask children, ‘would you be holding a book about her if it was a story of someone who tried but didn’t try again?’” said Houts, who started work on the book after noticing that a trail that her family was hiking in the Hocking Hills was named after “Grandma Gatewood.”

“When I started to research (Gatewood), I found out that she wasn’t exactly the person you would expect to be a record-breaking trail hiker, and I found that no one had told her story in a book form, at the time,” said Houts. “Interestingly enough, at the same time I was doing my research for a children’s book about Grandma Gatewood, Ben Montgomery was writing her biography for adults, so we were on this parallel journey writing two books about the same person.”

Both Houts and Montgomery explore Gatewood’s life after her initial successful hike in 1955 in their books, and how she went on to be a big proponent of trail conservancy.

“In the book, I make the argument that she saved the Appalachian Trail, as we know it,” said Montgomery. “In 1955, there were stretches of trail that were completely unmaintained, and it was seriously jeopardizing the original vision of the trail, as a way to walk from Georgia to Maine. The attention that Gatewood brought to the trail was very important in introducing it to Americans, many of whom didn’t know anything about it at the time. If you look into the numbers of people who attempt thru-hikes of the Appalachian Trail, it goes up dramatically after Gatewood completed her third and final hike of the trail in the ‘60s. Some ten thousand people attempt it every year, and only about a quarter of those people make it, but that’s all a byproduct of the effort Emma Gatewood made in pushing for the trail to be better maintained for future generations.”

On Saturday, October 13, Hocking Hills will hold its annual Grandma Gatewood’s Fall Colors Hike, which kicks off at 9 a.m. from the Old Man’s Cave Visitor Center. Montgomery mentioned that he will make sure to tackle that length of the trail while he spends time in the region close to his presentation at Ohio University.

“LadyBug” Author To Speak At OU-Lancaster