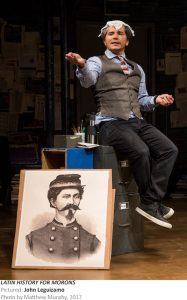 Beginning his career as a stand-up comic in the early 1980s, John Leguizamo garnered early-career acclaim in 1993 with his memorable role in “Carlito’s Way,” which led to an extensive film and television career including roles in “To Wong Foo…,” “Romeo + Juliet,” “Moulin Rouge” and many more.

But it has been in the theater that Leguizamo has been able to fully display his quicksilver comic brilliance and insightful social consciousness in a series of one-man shows: “Mambo Mouth,” “Spic-O-Rama,” “Freak,” “Sexaholix…A Love Story” and “Ghetto Klown.” In partnership with Latino Public Broadcasting’s arts and culture series VOCES, Great Performances presents this behind-the-scenes documentary chronicling Leguizamo’s latest theatrical showcase, “Latin History for Morons.” This comic yet pointed look at the repression of Latino culture in America follows Leguizamo’s journey through his own family history to his first-ever comedy club tour and to Off-Broadway workshops of the new show. Along the way, Leguizamo navigates the challenges of writing (and re-writing) history lessons intended

to enlighten and entertain.

About Great Performances
Great Performances is produced by THIRTEEN Productions LLC for WNET, one of America’s most prolific and respected public media providers. Throughout its more than 40-year history on public television, Great Performances has provided viewers across the country with an unparalleled showcase of the best in all genres of the performing arts, serving as America’s most prestigious and enduring broadcaster of cultural programming. Bill O’Donnell is series producer and David Horn is executive producer.