TOM PETTY AND THE HEARTBREAKERS – FROM GAINESVILLE:
THE 30TH ANNIVERSARY CONCERT
Premieres November 24, 2018 at 9 p.m. on WOUB

– A Hometown Show From One of Rock’s Most Iconic Bands –

In 2006 during their 30th-anniversary tour, Tom Petty and The Heartbreakers returned to Gainesville, Florida, hometown of Petty and bandmates Mike Campbell and Benmont Tench. By this time, Petty and The Heartbreakers had been inducted into the Rock and Roll Hall of Fame in 2002 (their first year of eligibility), sold millions of records, and Petty had become a rock icon and one of the best-selling artists of all time. 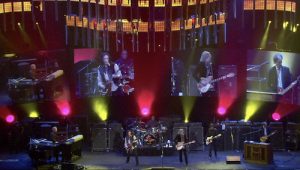 Welcomed as hometown heroes and presented with the keys to the city by Gainesville’s mayor, Petty and The Heartbreakers — joined on several songs by special guest Stevie Nicks — performed an electrifying and emotional concert on September 21 at the Stephen C. O’Connell Center. Now viewers can celebrate with the overjoyed fans in this taped program of the live concert featuring some of their greatest hits like “Free Fallin,’” “Mary Jane’s Last Dance,” “I Won’t Back Down” and more.

TOM PETTY AND THE HEARTBREAKERS – FROM GAINESVILLE: THE 30TH ANNIVERSARY CONCERT is part of special programming premiering on PBS stations in November/December 2018.

The program features these performances: