– A new documentary follows researchers as they work to solve the mysteries that circle the USS Indianapolis, highlighting the ship’s heroic legacy and dramatic final moments – 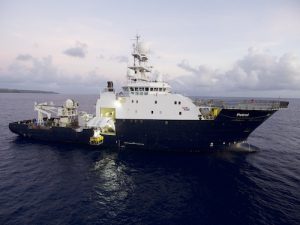 A new documentary from Paul G. Allen’s Vulcan Productions, USS INDIANAPOLIS: THE FINAL CHAPTER, premieres on PBS on Tuesday, January 8, 2019 at 10:00-11:30 p.m. on WOUB. The documentary is a scientific detective story detailing the discovery of the USS Indianapolis wreck site under the Philippine Sea, while revealing the riveting history of the ill-fated ship and its final voyage. The ship’s sinking during World War II marks the largest loss of life in U.S. Naval history, with only 316 of nearly 1,200 sailors surviving the attack.

The tragic end of the Indianapolis and the location of her remains have been shrouded in mystery for more than seven decades, until now. USS INDIANAPOLIS: THE FINAL CHAPTER follows Paul G. Allen’s expedition team aboard his research vessel Petrel, as they search the remote Philippine Sea and uncover the well-preserved wreckage of the Indianapolis nearly 18,000 feet beneath the surface.

Audiences are in for a rare, high-definition look underwater with the help of state-of-the-art technology 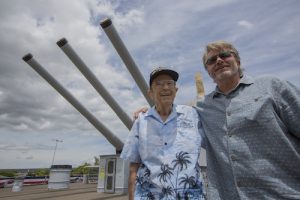 used in the search, including an autonomous underwater vehicle used to scan the crushing depths of the sea floor.

By combining never-before-seen archival footage and CGI with the moving accounts of the few remaining survivors and the testimony of historians, USS INDIANAPOLIS: THE FINAL CHAPTER reconstructs the ship’s dramatic final moments.

Woven throughout USS INDIANAPOLIS: THE FINAL CHAPTER is the story of Captain Charles Butler McVay III, who survives the sinking of his ship only to face a Navy court-martial – the only captain in U.S. history convicted for losing his ship in wartime.

In the waning days of WWII, the cruiser USS Indianapolis had just delivered “Little Boy” – the atomic bomb destined for Hiroshima – and sailed off to join the Allied invasion force. The captain of the ship, Charles Butler McVay III, was eager to arrive in Leyte in order to begin training his inexperienced crew. After the U.S. deciphered Japanese communication codes, the Navy knew there would be enemy submarines along McVay’s route — that warning, however, did not get to McVay in time and he sailed off without an escort. On the dark and cloudy night of July 30, 1945, the USS Indianapolis sailed with no lights on to avoid being seen. For a moment, just after midnight, the clouds parted and Indianapolis was spotted, alone and vulnerable. Torpedoed by a Japanese submarine in the middle of the Philippine Sea, she sank within minutes, taking 300 of her crew down with her. The remaining 900 survivors drifted for four and a half days, battling the sun, thirst, sharks, and their own fear. It was a disaster that owes as much to bureaucratic snafus as it does to enemy action: the Navy lost track of the ship and failed to mount a search. It was only by chance that a passing plane happened to spot the survivors and only 316 of the nearly 1,200 original crew were pulled from the sea alive. 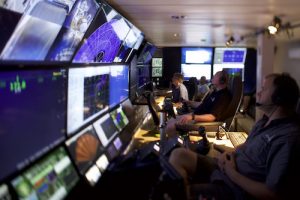 In 1968, Captain McVay committed suicide, sparking a campaign by his loyal crew to clear his name – a campaign joined by the captain of a nuclear submarine who risks his own career to right the injustice.

USS INDIANAPOLIS LIVE – FROM THE DEEP | September 13 at 10