ATHENS, Ohio– According to an Athens City police officer, an Old Dominion semi-truck knocked over a light pole on West Washington Street after backing into it while making a delivery to the Salaam restaurant.

The pole fell onto a car parked behind it and brought down two power lines.

Officials called the Athens City Street Department, AEP and a tow truck to the scene.

No injuries were reported. 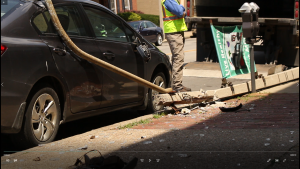 Portion Of Interstate Closed After ODOT Truck and Semi-Truck Accident