ATHENS, OH – WOUB’s television news program Newswatch has received an updated, high-tech facelift, and Ohio University students working on the nightly, half-hour program will get the opportunity to take advantage of it.

The new set debuted on September 16. Students are already seeing how this will help them land jobs and start them off on the right foot once they graduate. Elise Hammond is a senior, journalism major from Columbiana, Ohio. She is very excited about the new set and all the opportunities it presents for her as a producer. 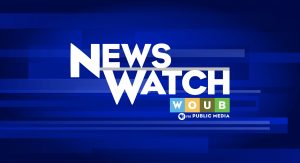 “I just think the new set really looks professional,” said Hammond. “Now those who are hiring me after graduation can see all the experience and potential I have. I feel like working on this set gives me a leg up in the job market. Plus, I can talk about how I helped build this show from the ground up with a new set.”

The set was donated by Spectrum in Columbus. Due to a recent reorganization, Spectrum no longer needed the custom-built set that was less than four years old and it became available to WOUB. Engineers at WOUB were able to fit the installation of the new set into their busy summer schedule.

“The new set is enabling students to have multiple creative options in the broadcast and digital platforms,” said Director of Student Development and Production Services Michael Rodriguez. “Students, both on camera and off, are learning new techniques and building a more dynamic newscast. They also have opportunities to experience multi-platform producing unmatched at Ohio University. Experience on this updated set will enhance student portfolios and enable them to be more competitive for employment.”

Vicki Swift is a junior, integrated media major from Delaware, Ohio. She works as a director for Newswatch. “The new set is great. We have had a chance to collaborate and make the show our own. There are many options for camera shots and it presents a new challenge.”

“When I first saw the set, I thought about all the different shots we could have and the ways the anchors could move around that they couldn’t on our old set,” said Hammond. “It gives us an opportunity to do different things and have the program look new and fast paced.”

Ben Schwartz is a senior from Chicago, Illinois. He wants to be hired as a local news reporter when he graduates and knows this set will help him reach his goal.

“The set is beautiful. It’s just high-tech. The main reason I’m so excited is now I have the opportunity to put the new set on my demo reel while I’m applying for jobs,” said Schwartz. “I produce, report and anchor for Newswatch, and as a producer, the new set gives you so much more to work with as well. There are so many different shots with the monitors behind the anchor. All the resources are there. It’s just a matter of us learning and figuring out how to make it work best.”

Newswatch is a professionally managed and student-produced television news program that airs every weekday at 6:30 p.m. on WOUB-TV covering news from the Ohio University campus as well as the surrounding counties and states. Approximately 50 students from a variety of Ohio University Scripps College of Communication schools work on the program each semester.

“If you’re interested in broadcast, video or live productions in any way, there’s always a spot for you at WOUB,” said Hammond. “So many who have graduated and worked at WOUB have done great things and have great jobs in great places. I already knew so much going into my internships since I’ve had time working at WOUB. I know I’ll be successful in my first job because I have the training from WOUB.”

“If you’re thinking of going into news, you have no choice but to work at WOUB,” said Schwartz. “We’re working every day to put out a newscast, and I don’t think you can get that kind of quality experience at any other university.”