Ohio University has announced a plan to phase out blue-light emergency phones on campus. The University cited a lack of use for the plan.

“There has not been an emergency use of the blue-light phone,” Chief Facilities Management Officer Steve Wood said. “They’ve been used primarily for getting directions.”

In addition to their lack of use,  maintenance costs may have contributed to the decision to phase them out. The emergency phones cost the university about $4,600 per year o maintain. 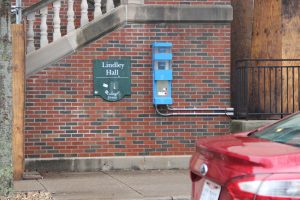 Despite their lack of use, some students say there is a psychological value to having the phones nearby.

“I just feel safer knowing that those phones are out there,” Ohio University senior Morgan Oldack said.

Ohio University installed these phones in the 1990s and early 2000s  to combat rising numbers of sexual assaults. The number of college students who owned cell phones was relatively low back then. However, according to the Pew Research Center, over 99% of Americans aged 18 – 29 own a cell phone today. As a result, the need for an emergency phone system waned.

An Ohio University app called Bobcat Safe has been touted as a possible replacement for the blue light phones. The app includes maps, and a single button immediately connecting the user to campus police. The app is free and available on the App Store and GooglePlay.

The Athens campus will not see the immediate removal of the blue-light phones.

“We are proposing that we phase out the blue phones as they fail, so if they’re still operating today they continue to operate; but if two months from now we have a problem that doesn’t take a minor repair … we would actually remove the blue light and the phone capability at that location,” Wood said.

The University of Colorado, Boulder began removing its blue-light phones in 2015. The university cited a lack of legitimate use for the decision.