Performance is free and open to the public

ATHENS, OH –The Sour Mash String Band has been tearing up the regional bluegrass scene for the past few years, and they make a return appearance for the March edition of WOUB’s Showdown. For nearly 40 years, WOUB’s Showdown has been bringing bluegrass musicians from around the region and the state to the WOUB studios for a live radio performance in front of an audience.

“We’re excited to have the Sour Mash String Band return to perform,” said WOUB Director of Radio Rusty Smith. “They bring a high level of energy when they play and are definitely crowd pleasers. In the last year or so they’ve really taken off on the festival scene.”

Calling themselves an outlaw, alternative, Americana, Bluegrass string band, they play cutting edge bluegrass from Truegrass to Newgrass with a slight twist of hillbilly funk. Members of the band are from Ohio and West Virginia, and several have performed on WOUB over the years in several different groups. They released a CD, Down the Highway, in 2016. 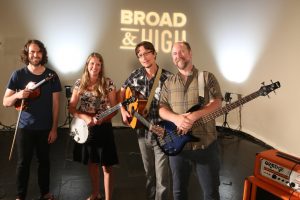 Also appearing are The Goldsberrys, a band from Columbus that performs original folkgrass jam music. They started out in 2015 as a husband and wife duo and blossomed into the four-piece folkgrass band. The Goldsberrys have released two albums – Hunker Me Down in August 2017 and By the Window in April 2019. The Goldsberrys describe their music as songs with positive lyrics that embrace life within the flow of time, woven with a four-part vocal harmony which creates an angelic sound.

The performances will occur on Sunday, March 1st at the WOUB Radio Studios. The studios are located on the third floor of the Radio and Television Building at 35 S. College Street in Athens. Showdown performances are held the first Sunday of each month (excluding the summer months) at 1 p.m. and are free and open to the public.

“We love bringing a variety of acts to Athens for Showdown, and we really enjoy giving Bluegrass fans an opportunity to see the performance at no charge. It’s a great time,” said Smith. “It started when one of (WOUB’s) former hosts brought in the Hart Brothers in 1982 and wanted to have a one-off performance of theirs in the studio. It was so much fun, we decided to keep doing it.”

Over the years, many acts who have gone on to be successful nationally, like Cherryholmes, The Price Sisters and Clay Hess, have performed as a part of Showdown.