Creating Fictional Horrors to Understand Real Ones: WOUB to Broadcast ‘Exhumed: a History of Zombies’ Oct. 30

Just in time for Halloween, WOUB-TV will broadcast Exhumed: a History of Zombies Friday, October 30 at 10 p.m. ET. The documentary, hosted by Dr. Emily Zarka, will examine what zombies say about our culture and innermost anxieties. 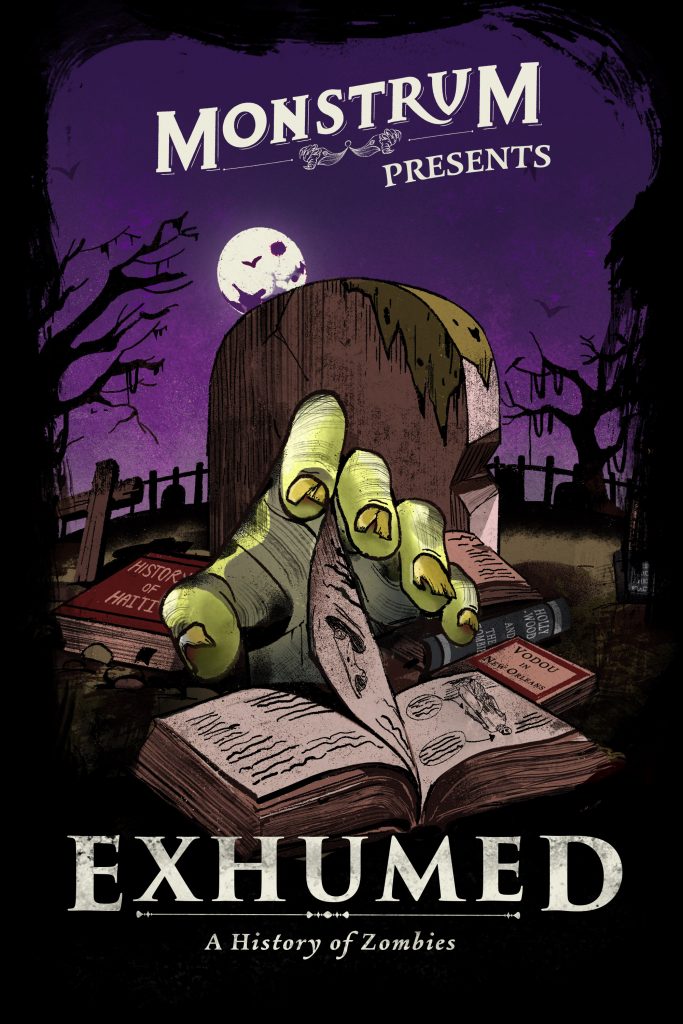 Zombies have been a part of western popular media’s lexicon for decades, with the most widely recognized version of the modern horror movie zombie making its debut on the big screen with George A. Romero’s 1968 classic Night of the Living Dead. The ultra-low budget film takes place in the midst of a devastating, mysterious zombie apocalypse – the dead are literally coming back to life and they’re hungry for human flesh.

The majority of the film is set in the barricaded basement of an old farmhouse, where seven humans work together (and against) each other in an effort to survive. They become a fascinating microcosm of human duality: our greatest strengths (the ingenuity and aptitude of Ben, played by Duane Jones) and our most troubling weaknesses (the pettiness and short-sightedness of Harry, played by Karl Hardman). We find that the most terrifying monsters the film depicts are not necessarily the slow-moving, cannibalistic ones besieging the farmhouse.

Dr. Gordon Briggs, an Ohio University professor who specializes in film, said that among the plethora of ways in which zombies have been imagined throughout cinema, those that articulate the monstrosity of man like Night of the Living Dead are his favorites.

Briggs points out that Ben, the leading man of the film, is black. Due to Ben’s resourcefulness, courageousness, and creativity, he’s the sole survivor out of the film’s characters – again and again he saves himself, and often the other humans (all of whom are white), from the roaming zombies. However, once he escapes the farmhouse, another type of evil is waiting for him.

“At the end of the film, another pack of mindless creatures — a (human) white lynch mob — shoots Ben in the head, guts him, and hangs him up, it’s almost like a lynching,” said Briggs. “So you have these zombies here, these mindless, braindead creatures — but at the same time, you have this other pack of ‘zombies’ that kill for a different reason.”

Various films portray zombie apocalypse situations occurring for a wide variety of reasons — but oftentimes the zombie plague is brought on by something that is all too familiar for many of us in 2020: a viral epidemic.

“It’s usually something viral, something medical, that’s killing people. In Night of the Living Dead, I think it’s just the dead coming back to life. But in other films, it’s a parasite or a zombie bite, and it turns you into a zombie too,” said Briggs.

Another particularly terrifying aspect of the zombie trope is that typically no one is immune to the possibility of becoming a part of the horde.

“Unlike, say, Nightmare on Elm Street or Friday the 13th, where it’s just one boogeyman, you have a monster anyone could become. Anyone can become a zombie, like your mom, your neighbor, your loved one, your husband, your spouse, whoever. There’s this idea that that no one is safe — society itself is sick,” said Briggs.

“Unlike, say, Nightmare on Elm Street or Friday the 13th, where it’s just one boogeyman, (in zombie films) you have a monster anyone could become. Anyone can become a zombie, like your mom, your neighbor, your loved one, your husband, your spouse, whoever. There’s this idea that that no one is safe — society itself is sick.” – Dr. Gordon Briggs

Brandon Thompson, executive director of Ohio Brew Week, DJ, and self-professed horror movie nerd, said the COVID-19 pandemic has greatly impacted how he views a hypothetical question he, as well as other fans of the genre, have asked a lot of people: ‘how do you think the U.S. would survive a real, classic, slow moving zombie apocalypse?’

“After experiencing COVID, I feel like we probably would not survive — nobody would believe a zombie apocalypse was even happening,” he said.

Thompson said that while he primarily watches horror films for reasons other than trying to decode some type of social commentary embedded in them, some zombie movies are just especially ripe for that kind of reading. In particular, Thompson mentioned Dawn of the Dead, the 1978 sequel to Night of the Living Dead. The film is set in a shopping mall, where a group of humans find shelter from the zombie apocalypse.

“Night of the Living Dead is kind of a satire of American consumerism. We use the word ‘zombie’ for people who just kind of do what they’re told and follow the leader,” said Thompson. “People just go back to what they know, even after they’ve become zombies – and what they know is the shopping mall.”

Briggs said the famous quote from horror writer Stephen King that we ‘make up horrors to help us cope with the real ones,’ rings true when we critically examine the films we watch to scare ourselves.

“The only country that’s faced the atomic bomb twice was Japan. No other country has faced that massive loss of life in seconds, other than Japan. 10 years later, they created one of the most iconic movie monsters ever,” said Briggs. “(Godzilla) was just a regular lizard until radiation came at him. And what does he do? He destroys Tokyo all over again. But what did the atomic bomb do? It destroyed Japanese cities. One of the ways that we deal with a tragedy like that is by symbolizing it — taking that tragedy and putting it in the form of a monster.”

Beyond serving as an allegory for society’s anxieties and collective traumas, Briggs said monsters like zombies can also bear a resemblance to parts of ourselves we might otherwise try to forget.

“I think there’s something in the zombie film that is a dark reflection of a part of us that we don’t want to confront: our society is sick. It’s not dead, but we’re all doing the same lifeless, pointless, brainless actions over and over and over again,” he said. “Within our capitalist society, we are zombies. The zombie movie also appeals to some anarchic part in our hearts: wanting to break free, blow stuff up, shoot the zombies, and regress to our more violent impulses.”

Briggs and Thompson provided lists of some of their favorite zombie films, and you can find them below.

“It’s just so well-done. It’s so well-made. Everything you want from a zombie film is there.”

“Night of the Creeps takes place on a college campus not that different than OU. It’s homecoming weekend and an alien meteorite carrying parasites has crashed nearby, and the parasites jump into your mouth, zombify your brain, and it’s up to this guy and his homecoming date to save the world.”

“Sugar Hill is the first zombie film with an African American woman in the lead. She’s a black woman whose boyfriend is killed by white gangsters, so she goes back to her hometown in New Orleans. Her relative is a voodoo priestess, so using her relative’s voodoo, she summons a zombie army, and guess who the zombies are? They’re dead slaves. She summons a zombie army to exact revenge on the white mobsters. If you could imagine Night of the Living Dead meets Kill Bill, you would get something like Sugar Hill.”

“Peter Jackson would become famous as the guy who directed Lord of the Rings. But before that, he did this low-budget film in New Zealand called Dead Alive. It’s about a boy who lives with his mom, and thanks to a virus, his mom becomes a zombie. Different townspeople around the town become zombies. But because the main character is such a nice, well-meaning guy, he doesn’t kill the zombies. He just disables them and buries them in the basement. The last 30 minutes of this movie are the most violent, bloody, cartoonish, over-the-top zombie scenes you’ve ever seen. It uses stop-motion animation, doll-mation, live action.”

“28 Days Later is a movie I hold in very high regard. It has a climax that’s right out of a bad dream.”

“In the Flesh is probably the smartest zombie TV show I’ve seen, and that includes stuff like The Walking Dead. The zombie apocalypse is over. Scientists have found a cure to the zombie apocalypse. They give the zombies a drug so their zombie flesh cravings have gone away. They are now a new minority group in British society, so they have segregated housing, they have to see social workers. The main character is almost like a drug addict because he’s a human again, he lives with his parents now, but he desperately, desperately, secretly wants to eat brains. Here’s the thing. It’s not a comedy. It’s actually a straight up drama.”

“Woody Harrelson is in this, and Bill Murray makes one of the greatest cameos ever. I really liked it because it talks about zombie movies, it’s funny, but it’s still kind of spooky in a way.”

“I really I recommend this one. It all takes place on a train. The reason I really liked it — without spoiling it  — is a gentleman who just punches zombies.”

“So this is kind of a sideways one and I love it. It’s the first movie where Jason really becomes a zombie. It’s really a slasher, but he is a zombie in that movie and that’s when he got his powers to really not be able to die. In the other movies, he took a lot of damage and everything like that, but this is the first one he’s basically Frankenstein.”

Get in the Halloween Spirit with EXHUMED: A HISTORY OF ZOMBIES, October 30 at 10 pm