The Golden Flashes’ relentless offense and suffocating defense proved to be too much for the Bobcats as Kent State won, 89-79. 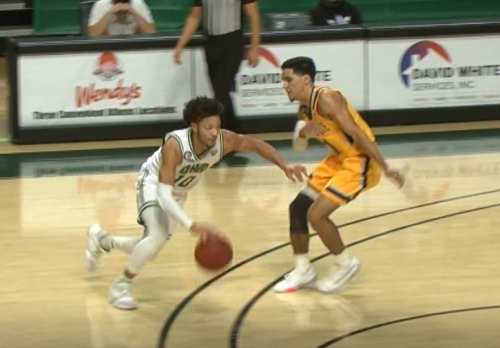 Ohio opened the game with a quick three-point basket from Ben Roderick off a Jason Preston assist. That was Ohio’s largest and only lead of the game.

Mike Nuga started the scoring off for Kent State by scoring the Golden Flashes’ first five points of the game.

Both the Bobcats and the Golden Flashes experienced their own runs before the Bobcats felt a scoring drought.

After experiencing a run the Bobcats experienced a three and half minute scoring drought. The drought ended with a corner three from Preston.

After Preston’s three, the Bobcats would not make another basket for the remainder of the half.  Ohio ended the half making one of their last 11 shots while Kent State made their last five shots of the half.

While Kent State’s defense forced a lot of issues, the Golden Flashes were also relentless offensively, getting 10 offensive rebounds that led to 12 second chance points.

“In the first half we struggled to get stops,” Ben Vander Plas said. “A big part of our offense comes from getting the rebound and pushing out…Our offense really flows with transition.”

“We just came out flat,” Preston said. “We weren’t being aggressive.”

Ohio offense seemed to find a spark offensively in the second half. The biggest contributors to the Bobcats second half was the duo of Vander Plas and Preston.

While the Bobcat offense found its spark offensively, Kent State seemed to match Ohio every step of the way.

“He’s a tough matchup when he’s making shots,” Ohio head coach Jeff Boals said. “He has a good mid-range, good three, and a really good passer out of the post… Second half we didn’t do near as good a job.”

The Bobcats look to get back in the win column as they travel to Northern Illinois (2-10, 1-6) on Tuesday.