Telemedicine Sounds Great, But There Are Barriers, Too

INDIANAPOLIS, Ind. (Side Effects) — As soon as COVID-19 hit, there was a massive jump in telemedicine visits. A Centers for Disease Control study found that in March 2020 there was a 154% increase compared to the previous year.

Now it’s clear the coronavirus has dramatically changed the way Americans get medical care. But some of these virtual options remain out of reach for the most vulnerable populations, like seniors.

Telemedicine encompasses many kinds of services: video calls, text messages, phone calls, health trackers and more. Dr. James Marcian, director of the UC Davis Center for Health and Technology, says it can be an equalizer — or not.

“Just like with everything it can be implemented in a way that it doesn’t make things equal,” Marcian says. “Because all of a sudden I have a swipe of a credit card … I can talk to a doctor of whatever specialist I want, online right now.”

A recent study from the Journal of the American Medical Association found that older age was associated with fewer telemedicine visits, and older people were less likely to use video.

Marcian says he’s experienced one of the barriers to access — the technical know-how — while trying to help his mother meet with her doctor.

“She had to download an app, and she doesn’t really use her mobile phone. And she had to [create a]  username and password,” Marcian recalls. “And she says, ‘I’m just going to go in, you know.’”

Seniors who are familiar with telemedicine enjoy it, says Sarah Waddle, who heads AARP Indiana.

“But the people who didn’t know about it truly didn’t know anything about it,” Waddle says. She has heard the first-hand stories of people who struggle with telehealth, like a man with a heart monitor in rural Indiana. 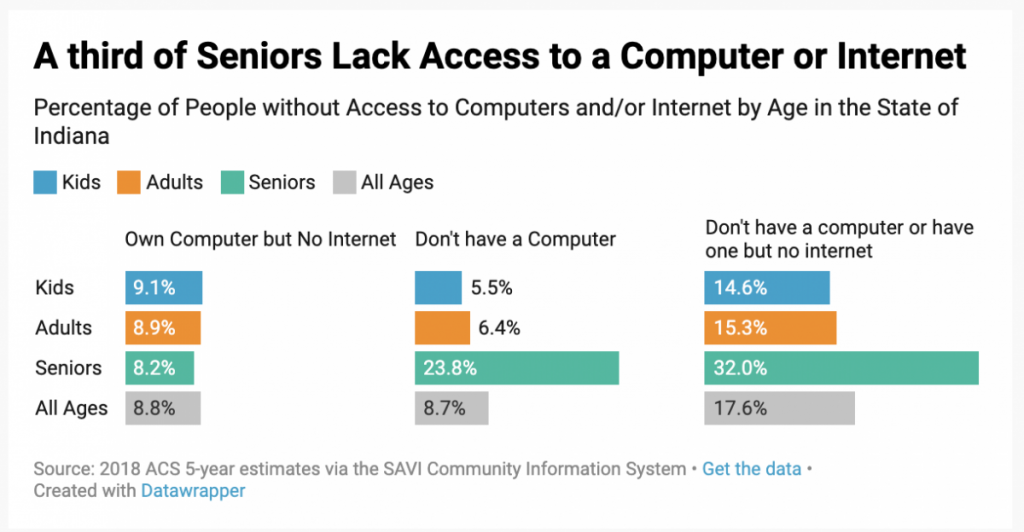 “They didn’t have an internet connection that was fast enough to upload that data,” Waddle says. “Mobility was an issue for him, but his wife had to load him up in their car once a week, drive into town to the library, so that they could upload his heart monitor data to his physician.”

Experts say COVID-19 sparked a five- to 10-year advancement in telemedicine, in part by triggering a relaxation of regulations. But slow Internet connections keep the full range of telemedicine services out of reach for many Americans.

“COVID is shining a very bright light on these issues,” says Roberto Gallardo, director of the Purdue Center for Regional Development.

The Polis Center at IUPUI did a new analysis for Side Effects. Using 2018 data it showed that in Indiana, one in three seniors lacks access to either a computer or Internet service.

This gap appears even more stark in rural counties, where residents often suffer from worse health outcomes and doctor shortages. Internet access can be slow, non-existent or prohibitively expensive.

Iowa, Indiana and Illinois are among the Midwest states moving to expand broadband access. Even prior to 2020, Indiana has funneled $100 million into broadband expansion.

“It’s been robust, but we still have a long way to go,” Indiana state Sen. Eric Koch says. “In addition to bringing the internet service there, my view is it has to be a speed that is useful to the consumer.”

Becky Sanders, director of a regional telemedicine resource center, says Indiana is better off than other Midwest states.

Most of the center’s focus during the pandemic has been helping providers adjust to virtual care, she says. “That’s the biggest question: ‘If I do this, can I get paid for it?’”

Meanwhile, some seniors are adjusting just fine. Like Wanda Green, a 67-year-old in Gary, Indiana. She’s been talking with her doctor over the phone throughout the pandemic, instead of scheduling office visits.

“I don’t really want to be sitting in a waiting room amongst other people,” Green says. “Even after we’re able to get back to whatever normal is, I’ll still like talking to her on the phone.”

This story was produced by Side Effects Public Media, a news collaborative covering public health.