BOWLING GREEN, Ky. (OVR) — The COVID-19 pandemic is continuing to cripple the economy in the Ohio Valley and President Joe Biden and Congressional Democrats are pursuing his plan for economic recovery.

Biden’s economic priorities include raising the minimum wage to $15 an hour, forgiving student loan debt, and undoing some Trump-era tax cuts. But Biden’s immediate focus is on his “American Rescue Plan” for economic recovery and ending the pandemic.

Last month Biden laid out his two-step plan for rescue and recovery.

“The crisis of deep human suffering is in plain sight,” Biden said while giving an address about the plan. “We have to act, and we have to act now.”

Regional economists have weighed in on what the Ohio Valley needs and many are in agreement that the region is in need of financial aid, job creation and security, and a national plan to end the pandemic.

The rescue plan focuses on giving people immediate relief. It includes direct aid to individuals, businesses, and state and local governments. It also includes an expansion of COVID-19 testing and vaccine distribution, an extension on unemployment benefits, and funds for schools to reopen.

Jason Bailey is the executive director of the Kentucky Center for Economic Policy, a left-leaning nonprofit. Bailey said that Biden is making the right call by prioritizing relief first.

“Until we get herd immunity and get people vaccinated, we are going to have economic woes. There’s just no way around that,” he said. “We need to provide relief, so people aren’t falling into poverty or falling deeper into poverty in the meantime.”

Even before the onset of the pandemic, Ohio Valley states recorded poverty rates above national averages. Census Bureau data for 2019 show Kentucky and West Virginia with poverty rates of 16%, putting them among six states that have the highest estimated rates of poverty in the country. 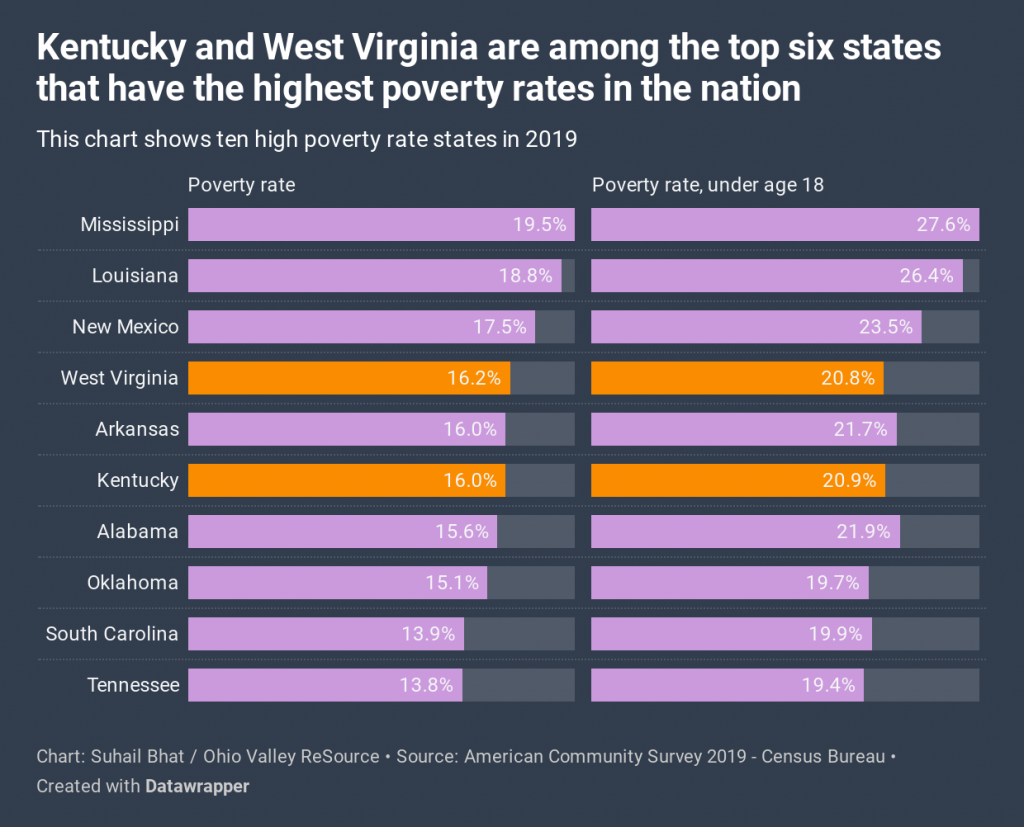 One area public health expert says efforts to get the pandemic under control should have the scale and focus of the World War II Manhattan Project.

“Every policy that he is putting in place now has to laser focus on getting us back to where we were before,” Ben Chandler, president of the Foundation for a Healthy Kentucky said. “Getting the vaccine in people’s arms, giving them the confidence to participate in the economy.”

The Ohio Valley saw massive unemployment in the early phases of the pandemic and cases, hospitalizations and deaths rose in the third wave. The cases and hospitalizations have declined since January, giving the states an opportunity to move their efforts toward COVID-19 vaccinations.

West Virginia is setting an example for the rest of the country as it leads the way by rapidly vaccinating its residents. The state had fully vaccinated 6.4% of its population as of February 11, the highest vaccination rate in the nation. The state also injected 12.4% of its 1.8 million people with the first doses of the COVID-19 vaccines (which require two rounds of shots for full efficacy).

Kentucky gave first shots to 10.2% of its population while 9.5% of Ohio’s population have started vaccination.

“People don’t spend money if they aren’t confident. Being able to allow people to get out in public and go about their business and participate (in the economy) is necessary for that,” he said.

The recovery aspect of Biden’s plan is geared towards job creation and growth. Biden wants to invest in infrastructure, clean energy, technology, and manufacturing to create millions of “good-paying” union jobs. According to senior researcher Amanda Woodrum with the non-profit research institute Policy Matters Ohio, infrastructure investment is a good way to create jobs essential for the region to prosper.

“The idea that we are calling for infrastructure that can build not only a more sustainable economy going forward but one that involves shared prosperity and build local wealth rather than that of absentee corporations,” she said.

Woodrum’s group tends toward left-of-center policies. But even more right-leaning economic groups agree that getting people back to work is what the country needs.

Garrett Ballengee is the executive director of the right-leaning Cardinal Institute for West Virginia. He’s critical of some of Biden’s plans, including reversing tax cuts, but said some of the Biden policies are promising.

“I think it’s important to remember that we need to get people back to work as safely and as quickly as we can,” Ballengee said. “There’s really no substitute for earning a paycheck for a number of different reasons.”

It’s too early to say how much of Biden’s economic agenda will be approved by a narrowly divided Congress. But it’s a safe bet that regional lawmakers will be key players.

Senate minority leader Mitch McConnell of Kentucky says Republicans will offer amendments to the quote “rushed process” of the plan. Even some more conservative Democrats, such as West Virginia’s Joe Manchin, could be a barrier to some of Biden’s economic goals.

But Kentucky Democratic representative John Yarmuth, chair of the House Budget Committee, stressed that the next phase of COVID-19 relief will get done regardless of Republican support.