LOUISVILLE, Ky. (OVR) — A new analysis of flooding risk that accounts for the effects of climate change finds many more homes in Appalachian communities in Kentucky, Ohio and West Virginia are at risk of flooding than the federal government’s emergency managers have indicated. In 12 Appalachian counties in the region, at least half of all residences are at risk, and in West Virginia one in five homes carry a high risk of flooding, according to an analysis of the data released by the nonprofit First Street Foundation.

“In Kentucky, West Virginia and Ohio — especially the Appalachian region — that risk has not been tracked properly,” said Jeremy Porter, head of research and development at First Street Foundation. Porter said the findings have implications for whether homeowners are properly insured against the risk of flooding damage. “People are not protected against the current climate environment.”

According to the ReSource analysis, nearly 20% of homes in West Virginia, 5% in Kentucky and 2.3% in Ohio are at risk of seeing structural damage due to flooding. Combined, this puts more than 230,000 residential properties eligible for federal flood insurance at risk in the Ohio Valley. Worse, this number could increase by more than 2,500 homes in three decades. 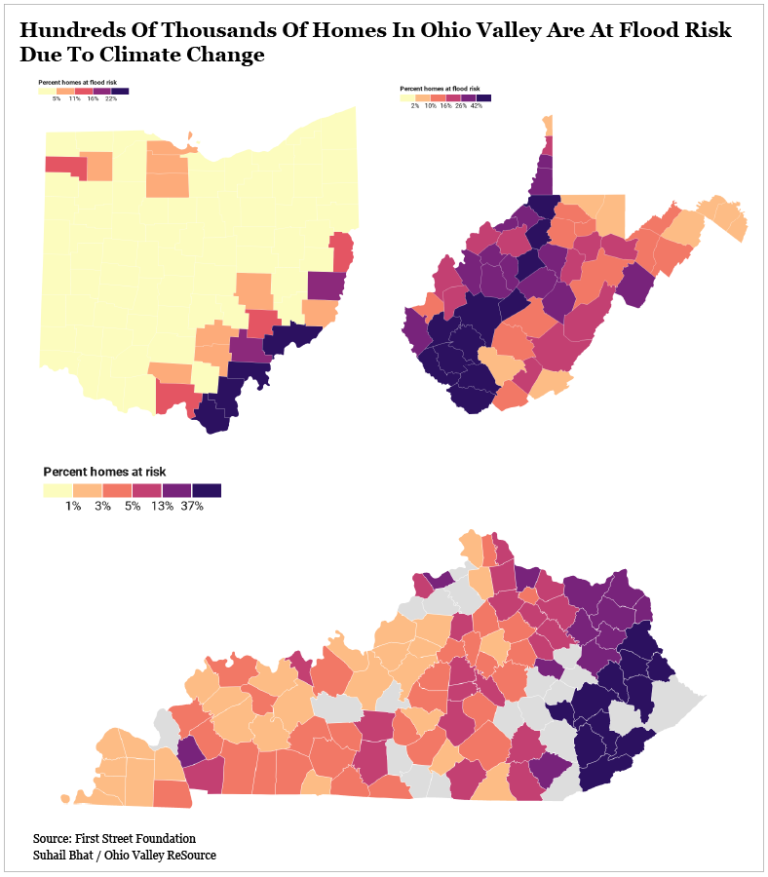 The data also showed the highest risk for flooding in the region falls in places with lower incomes to pay for or prevent flooding damage. The ReSource analysis found that counties with lower median household income are more likely to see a bigger impact from flooding.

For example, in 12 Ohio Valley counties at least one in every two residential properties is at risk for flooding damages. These include seven counties in Kentucky (Breathitt, Floyd, Johnson, Leslie, Letcher, Magoffin and Martin) and five counties in West Virginia (Boone, Gilmer, Logan, McDowell and Wyoming).

These counties include some of the poorest counties not only in the Ohio Valley but in the country. In McDowell County, which primarily depended on the coal industry for jobs and revenue, median household income in 2019 was $27,682 compared to $68,703 nationwide. About 60% of homes in McDowell County are at risk of structural damage due to flooding, according to the First Street Foundation data.

Many residents in these counties struggle to afford necessities as it is, let alone paying for flood insurance or disaster-driven home repairs. As the managers of the nation’s flood insurance program increase rates to account for higher flood risk, some of those at greatest risk could also be those least able to pay to protect themselves.

Much of the public understanding of flooding risk comes from work done by FEMA, the Federal Emergency Management Agency, which establishes special flood hazard areas based largely on historical flood data. But Porter explained that FEMA’s calculations, based on the likelihood of a 100-year flood event, oversimplify the range of flooding risks, especially along smaller creeks and tributaries, and do not take into account how a changing climate is affecting precipitation.

Porter said that when graphing a region’s rainfall over the course of a year, one would normally find a distribution of rain events “from a light sprinkle” on the left side of a graph “to torrential downpours” on the right.

“What we are seeing is there are not more rain events, but more heavy rain events occurring with climate change on that far right hand side,” he said.

And this is not just a phenomenon predicted by climate models — it is already evident in recent meteorological data. The National Climate Assessment, a report compiled and vetted by 13 federal agencies, shows that intense rainstorms have increased significantly in the Ohio Valley over the past half-century. In West Virginia and parts of the northeastern U.S., the proportion of precipitation that comes down in the heaviest storms went up by more than 50%. In Kentucky and Ohio, those heavy storms are up by about a third over the same period.

Porter spent much of his childhood in Kentucky and earned degrees at the University of Louisville, so he is familiar with the Appalachian landscape and its history of flooding. Heavy downpours can easily produce flash flooding in the hilly terrain of Appalachia where many communities lie in narrow river valleys.  Porter said the increase in heavy precipitation events raises the risk of the types of damaging floods ordinarily expected to occur only once in a century.

The Ohio Valley has suffered numerous flood disasters in recent years. In late June 2016, West Virginia experienced one of the worst flash flood episodes in state history. Twenty-three people were killed in a flood disaster that destroyed more than 1,500 homes and businesses and significantly damaged another 2,500. Highways and bridges suffered about $53 million in damages. Because of the intensity and level of rain, the National Weather Service said that it expected a downpour of that size once in 1000 years.

The following summer, eight West Virginia counties were again in a state of emergency due to flash flooding. However, ReSource reporting in early 2020 showed the state had still not followed through on plans to improve flood resilience in vulnerable communities.

Frequent high water levels along the Ohio River have raised concerns about the antiquated system of floodwalls, pumps and levees that protect dozens of cities and towns from Pittsburgh to Cairo, Illinois.

Increased flooding also threatens sites that contain hazardous chemicals. An analysis in 2017 by the AP showed that 16 sites vulnerable to flooding in Kentucky, Ohio and West Virginia have about 43,000 people living within one mile of a federally recognized hazardous site. Many of those people could be especially vulnerable to the health and environmental effects of toxic contamination.

First Street Foundation estimates average annual loss due to “substantial” flood risk around the country at $4,694 per property and expects it to rise by 61% to $7,563 per property in three decades due to climate change. This has major implications for the National Flood Insurance Program, or NFIP.

An NPR analysis of the FSF data found that nationwide, people in high median income communities get the best deals on flood insurance, as measured by the gap between the amount paid by a household and the annual cost of flood damage to their house. Wealthy coastal homeowners are essentially subsidized by taxpayers, and NPR also found that homeowners in whiter neighborhoods generally are getting a better deal on flood insurance than others.

FEMA plans to increase rates beginning this year for the flood insurance program in those places where the risk of damage is high. That may serve to eliminate the unfair advantage that wealthy communities enjoy, but it could also make flood insurance unaffordable for low income places at high risk, such as those in Appalachia.

Porter said that Congress is eventually going to have to do something to make sure people can still get affordable insurance.

“There will have to be some reconciliation between the approach NFIP is taking and the realities in the real world, where people are not going to have insurance if they can’t afford it,” he said.

Changes Being Made To Make Filing For Unemployment Easier